We've Seen This Before

The President of the United States is campaigning for reelection with a Nazi symbol. Again.

On the left: an official Trump/Pence “America First” tee.

On the right; the Iron Eagle, the official symbol of the Nazi party.
⁰It’s not an accident. Bigotry is their entire brand. pic.twitter.com/mSOBxwf7Wa
— Bend the Arc: Jewish Action (@jewishaction) July 1, 2020

You know, I really have to hand it to the Trump folks--they genuinely have given up on subtlety, but even as "wow, WTF" as this is, I have definitely seen the same general design before, quite recently, with a different Republican:

So, that was a thing that definitely happened, and we all had to get quietly studied about it. Sure, Trump's eagle is facing right not left. But, look, deep into my baby-blues here: no, Trump and them are playing a game with you all, and in his case, it is what you think it is. The point of the game is baiting us into calling him on it. Because, take this: 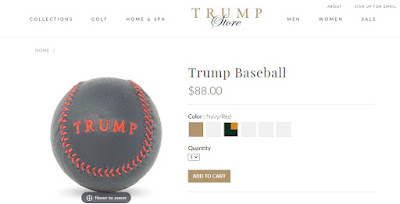 Like, why $88, exactly, and not a nice, round figure like $90? We all know that 88 means "heil Hitler" in certain circles, but surely that, like a statement with 14 words exactly, is just a coincidence, right? We're not like those QAnon dopes out here, just practicing numerology and conspiracy theories, yes? The Trump Administration and/or campaign wouldn't just be dropping 1488 references to fuck with us, like, I dunno in documents released by agencies regarding immigration? The campaign wouldn't quite accidentally use a Nazi concentration camp symbol for political prisoners to identify Antifa?

This is the unfunny thing about fascism--the sarcasm. The joke that isn't. After all, US of A fascist-fans think the height of humor is ROFLMURDERCOPTER: 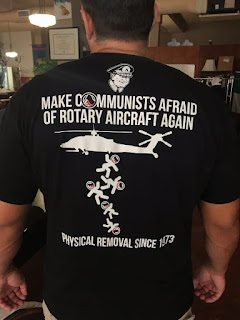 And that isn't subtle at all--nor is their conflation of Antifa with Communism. (Anymore than we should be fooled with any put-ons about how "BLM is Marxist". Yeah, bud, I speak that language. Nice way to pretend that people wanting lawful law enforcement and a legal system that doesn't tolerate extralegal assassinations are the bad guys, and not, say, a president who yells about law and order and has no idea what the law means and takes orders from Russia.)

We've gone past Pepe memes to the freakin' boogaloo, and that sounds so fucking dumb I have to wash my mouth out with liquor to even say it in writing. I mean, look at these sometimes self-admitted black-pilled mofos of limited fuckability. They aren't definitely your typical right-wing wienies, but they want a race war, and welp. Trump will suggest it's totally possible.

I mean, he said they were fine people, right? But lately, he's been leapfrogging past his old Attorney General in terms of outright racism, and embracing the history of the GOP that they never wanted to see made quite so explicit before.  I mean, what else can you make of his embracing segregation in housing and schools, and talking about pro-Black civil rights as being about "hate" and "denigrating" the neighborhood? (We can see Trump right there-"denigrating". That word means to blacken and we can sound out all the syllables for ourselves. The only thing we question is whether Trump typed that himself. Because Kayleigh McEnany says he can read, but we have questions.)

Trump's not  just dog-whistling, he's sounding an air-raid siren, and I think that means he might think he's in a spot of trouble, especially if he's counting on Ken and Karen in suburbia to get their shooty-shoots on to save his ass: 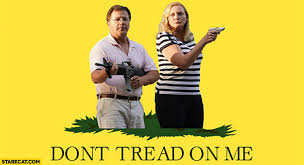 But since some of the folks around Trump are read into  The Turner Diaries  and Camp of the Saints, maybe they think this is a useful thing to count on when and if the cries of "fake news" don't sort his PR out.

It's disgraceful. It's divisive. It's all the proof we ever needed of his unfitness and that of all his supporters. In case of race war, my buttermilk ass is devoted to the human race. And I have no time for anyone who feels any different about that.

UPDATE: I should have included, but sort of missed, he is here to protect white people against the worst, most life-destroying thing that could happen to them: being called out, especially if it's true. He'll protect the statues of Confederates, and show them more concern than he does our troops in the battlefield. He'll threaten a veto of defense funds if it includes a change of the names of our military bases. He stands up for racists by being the target that lets the regular degular everyday bigot go on. His people like that about him. He makes them feel not deplorable.