I think the argumentation here is good, but I admit, I am not a part of this culture, so I don't know how influential Christianity Today is with evangelicals in general. I understand Franklin Graham and Jerry Falwell, Jr. have already slammed it (but they are so associated with Trump that stands to be expected). As I understand it, this magazine probably isn't that influential with the more fundamentalist Trump supporter. It also strikes me that, as with the arguments of Never-Trumpers, this will fall into the category of heresy referred to as "elitism", which I have after years of struggle finally got into my dense leftist head to means, for conservatives, being morally scolded by anyone whose convictions one does not entirely share.

I also wonder a bit about an idea I have come across that some evangelicals may be a bit impatient for Trump to give way to President Pence. I'm a little more comfortable with my opinion on that--if Trump felt threatened that he was being shoved aside for a more palatable candidate, he'd bring Pence down with him because Pence appears to have been in the loop regarding the Ukraine scheme. I don't think Trump planned Pence's involvement strategically as a hedge--he just gets people involved in this business to prove loyalty because that's how he works--like the pitch that defileth.

UPDATE: Rest assured, Trump is having no more to do with this publication (snerk). 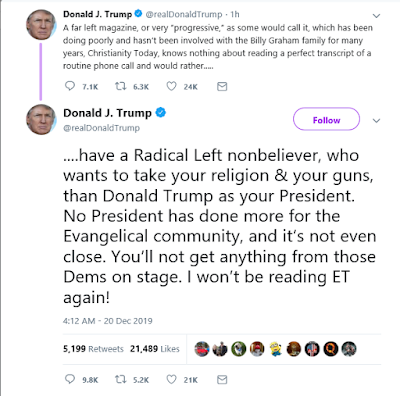 No president has done what he's done for religion, ever! The damned nerve! He's the American Constantine!
at December 20, 2019