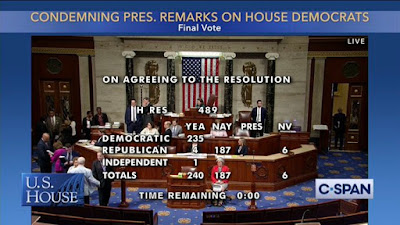 Today's vote to condemn President Trump's racist remarks regarding the House Democrats' "Squad" may not seem like a lot, but it is. For one thing, it is a highly unusual move for Congress to make, for another, the act of taking this move required an actual violation of parliamentary rules forbidding disparaging the president in order to properly characterize the things that he said.  The point, however, is that what Trump has said, and the final vote, are now a matter of record.

All Democrats, four Republicans, and Justin Amash voted to condemn. We now have a record of 187 Republicans who are comfortable, on record, with what the President said.

So, how do House Republicans want to deal with this matter. I would say, chiefly, they would prefer not to. They do want to complain that Speaker Pelosi "broke the rules" regarding decorum which is just a quaint thing to assert when defending Trump (not the greatest fan of rules or decorum). And Minority Leader Kevin McCarthy and Rep. Liz Cheney chose to follow Sen. Lindsey Graham's lead and talk about socialism. Because why not distract from the president's racism with a Red Scare (and, I guess, claims about the disloyalty of a certain "dark underbelly" that "pals around with terrorists" while we're at it, to not forget Kellyanne Conway's very busy day)?

In just the way this vote landed along more or less partisan lines, I think feelings about this vote and what it means will likely be interpreted differently by people based on their affiliation. To my thinking, it demonstrates that House Republicans will stick together even if the president's language is egregious, even if his behavior is egregious, for the most part. Time will tell whether this has any effect on the constituencies of those House members later on.

But the point of the exercise wasn't to shame Trump (he doesn't know what shame is) or even to change his behavior (which seems pretty baked-in at this point).  Based on prior behavior, Trump is likely to even double-down. It was to get the reaction of House Republicans down for the record.

And this is now what we have.