Elizabeth Warren is Ready To Fight 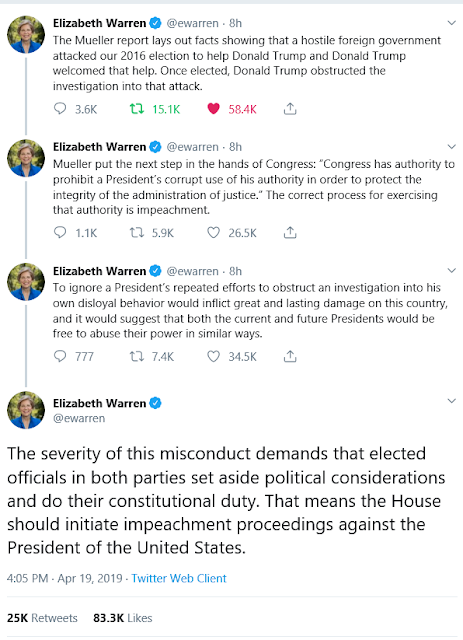 If there was anything I wanted from a candidate, it would be that they had a serious interest in crafting really solid policies that would help raise up the personal economy of working people, instead of focusing on the stock market and whether the rich did well, and showing that they were really in the race with the intention to kick ass. Senator Warren has been out here talking about the policies (I've been a fan since Occupy, and as much as I liked Senator Sanders because of his filibuster at the time, she's had me at "hello let's stop the banks from fucking people over").

She did her damndest trolling Trump last election.  That's because she has fight in her. Her "give a shit" dial is set to 11. So her considered opinion that the House should commence with impeachment strikes me as flowing naturally from her wrath that once again, some privileged asshole has gotten over and needs to get put back in his place, and we need some damn standards about what conduct is appropriate in this office.

Right now, I know Warren has the energy and the understanding of how to correct our course. I have never been ready to endorse early, but I feel like we're in a different time and place, and I don't want this weird Swalwell, Ryan, Moulton, whatever. (They are okay people--especially Swalwell--I just think I want someone for president that I have seen being president for a little while longer than yesterday.) I don't give a shit about any damn near moderate white guy lane. I don't want people who just "think they can".  I want a person who goddamn will.   I've already made my Biden feelings pretty transparent. For me, there are two people in this race, and they are Elizabeth Warren, and Kamala Harris. Pete and Beto and 'em need to find value from doing more and better elsewhere.

I will possibly move from this position in the coming months, but this is where I am right now. Warren wants Trump gone because he is bad and all of this looks bad, and she'll fight Mike Pence if that's the guy, too.

I like her fight. She has fight that wakes up the fight in me.

this. I've been a Warren fan for a while, and will happily vote for her in the primary and (hopefully) general elections.