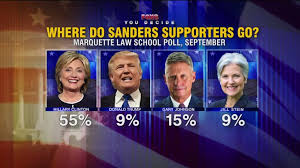 I found myself basically uncharacteristically without calm in my own comment section, which I've spent the last day and a half trying to get myself rational about. Regarding third party voting, or as I look at it, "voting your feelings", I absolutely wasn't trying to offer a good faith argument against voting third party because the exercise itself is infuriating to me. It feels like the reason not to do it should be self-evident and I should not have to make the case against it because history already did.

But I can't leave it like that, because my commenter hurled some pretty justifiable shit at me, and in retrospect, my freaking out over electoral shenanigans isn't a good excuse for me to be rude, unhelpful, and above all, unbearably hostile to people who aren't acting with deliberate bad intent, no matter what I think the results of their decisions could be. Other folks' feelings about what they do with their vote is legitimate to them, even if fully unfathomable to me. All I can do is try to unpack my white-knuckle panic at what I view as a threat to anything like a progressive electoral agenda going forward.

When I half-jokingly tell people I am still not fully over the 2000 Presidential election, it's just that--only half-jokingly. I've had time to replay how the media covered the candidates, whether the Florida recount debacle could have gone another way, and oh so much time wondering how the period 2001-2008 would have looked different if only Al Gore won. Take just having someone in office who took climate change seriously and might have addressed it then. Or someone who might have listened and responded differently to intelligence about operatives on behalf of Bin Laden looking to unleash an attack on US soil, or with the patience to view the search for WMD's in Iraq wholly differently. I'm not kidding when I say I developed a distinctly hostile attitude to the concept of third party voting from this exact line of thought.

The political calculation with respects to our two-party set up just seemed pretty crystalline clear to me--the party that gets the most votes, wins. Regardless of how the other parties place or show. And if Democrats, the established left-leaning party in this country, doesn't get the most votes in a contest, progressive policy values don't advance. You get Republicans in office. And progressive momentum is stalled or rolled back. It isn't the intention of the third party voter. It's just the damn effect. Numbers don't care about feelings.  This is why I clench up when I hear people sincerely talk about how it would be nice to just have some other options. 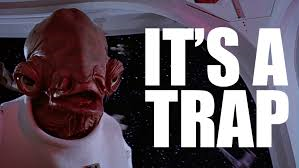 We're not looking back fondly on the presidencies of Jack Anderson or Angela Davis or Ross Perot. That's because of a lot of things, structurally, about the US electorate--there isn't a lot that tempts most voters away from one of the two established political firms in this country, and despite all the media "both-sidesing" in the world, if you have historically voted with one party or the other, you already know the hell why you do and how the parties are different. And if this question was a little muddy in 2000, it sure as hell should not have been by 2016 as the parties only grew more ideologically divergent, and the actual personal history, experience, and character of the Republican and Democratic contestants should have made abundantly clear.

You would have thought. But after microscopic focus on emails and Benghazi and pantsuits and hot sauce for Clinton, and a fuzzy focus on what basically amounts to a whole entire life of crime-adjacency for Trump, there were still enough people (especially after microtargeted Facebook ads and bad-mouthing via RT and people who I will never look at the same way, like Chris Hedges and Cornell West, trying to make Jill Stein look legit) who were ready for Not Hillary.

What the fuck did these people expect? The only Not Hillary they were ever going to get was Trump. There isn't a magic curtain that slides open when enough left-leaning folks of good will get together and say "welp--the Democratic Party done shit the bed" that gives them a whole new party with shiny new faces and a do-over.

You just get Republicans. And have you seen these Morlocks lately? They don't know if there should be a minimum wage or why food stamps should be a thing. Health care isn't a right and carrying a child to term is mandatory. And they like voter suppression and don't give a flying fuck about civil rights for minorities, whether religious, ethnic or sexual. And forget about regulatory agencies protecting consumers, the environment, or Homeland Security being good at helping people in times of trouble (Hurricane Katrina, Hurricane Maria). They'll just be about baby jails, and people getting hurt, and families being separated, etc.

Democrats aren't the sterling exemplars of everything good and great you might want them to be, but they'll hold the fucking line. If they can.

And that's the big "if". Democrats have to be in office and have the votes to get shit done. There is no Green Lantern ring that magically makes everything possible just because we had a Democratic president, in the case of Obama, or a Democratic House right now. Because Republicans are still here. Doing as they do.

And their voters have amaaazing brand loyalty. Duncan Hunter and Chris Collins got re-elected being under indictment. Steven King and Louie Gohmert are open bigots with brain worms, but by golly, they are still here.

Yet here we are, in the opening up of the 2020 Democratic primaries, when it should genuinely look like Trump is too corrupt and has too many investigations into himself to even be shining up his campaign shoes, but his white evangelical followers talk about him like he's the Second Coming, and we have damn fools already speculating if Elizabeth Warren is likable enough or if her DNA test was too damn much (not Trump's overt racism).

I can't face third party talk without becoming unbearably hostile. I don't know what genuine consideration of who the GOP is right now vs who the Democrats are right now, makes that search for oh, something different, not seem like sheer folly. It's blowing the damn rent money on a longshot nag. It's saying "Yeah, Republicans are pretty bad, boy, but what about this bullshit Clinton/Biden/some other Democrat m'f-r did 20 years ago?" 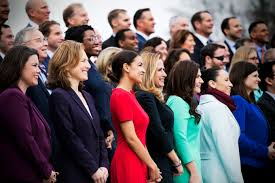 And we're off to a great start with the most diverse and female new Congress getting sworn in, and I am very proud of Senator Sanders for his work in encouraging a more genuinely left new generation of the Democratic party, even if he still isn't in or of it. This energy is welcomed, and gives me a lot of hope.

But I'm still a frantic white-knuckled hostile mess about talk regarding third parties. And for that matter, I'm already deep in my feelings about people saying "well, it can't be anybody but Joe Biden", or "Berner for Life" or "I'm still mad as hell about Al Franken and Kirsten Gillibrand can kick rocks" and so forth.

I have my own opinions about who I want to see run on the 2020 Democratic ticket (please don't start some "Kamala is a cop" on my watch, thanks!) but I will go hard for whoever the nominee eventually is, regardless. If it's Beto O'Rourke, I will stan: He shreds. Skateboard, fretboard, headboard--whev. If it's Lincoln Chafee, I...  Look it could be that Buttigieg dude. I'll put on my best face.

I'm just saying, in 2008 I would have fought a raging PUMA and I am still that unbearably hostile to people who can't get their shit together for the cause (not for the person if you aren't feeling it--the overall liberal agenda).

But I am also very contrite at my prior failure to fully articulate all this. I see third party voting as a pointless and ineffective gesture that can have the reverse consequences of what one intends. I can't hold third party voters responsible for Dems not winning all the time but even if it's once in 1000 elections, it's a shame ( I once could have been down with voting third party for state office until I became persuaded, quite recently, that there's no reason not to consider the Democratic party viable and capable of being built upon and given a local character in any state, and it might be the best bet for holding/expanding voting rights locally.) I get that the Democratic party has disappointed voters--I'm not thrilled with everything I've witnessed from then the past thirty years or so I've been paying attention. But the Republican party is always worse. Always. And I'm with Jane Curtin--death to the GOP. Not like, be killing their dudez. But that party is exactly why we can't ever have nice stuff.

It feels like the reason not to do it should be self-evident and I should not have to make the case against it because history already did.

It is self-evident to anyone who is amenable to evidence at all. Unfortunately, there's an irreducible minimum of people who are simply unreachable, though it seems to be pretty small now.

Anybody who could live through the Bush II administration and Trump's two years, and still believe it's OK to do anything that increases the risk of Republicans gaining power, is probably beyond the reach of any argument you or anyone else could formulate. We just have to regard such people as another obstacle we need to overcome by getting that many more sane voters to turn out.

Oh my. Thank you, thank you. I'm a newbie, and very happy to have found you (courtesy of FairAndUNbalanced)

2000 was strike one. 2016 was strike two. If the Republicans win the 2020 elections--assuming they've not been suspended by martial law by then--we as a nation, as a world, as a species, are pretty much done (okay, we may be already). And if you don't vote against them, and for the majority opposing party, regardless of whoever you might have 'preferred,' you've helped bring down the curtain. Cranked it yourself.

I waited all year to finally post that I know, and you know, that the last comment doesn't even reflect how either elections or dildoes work.