This Photo Op Was A Good Trump Day 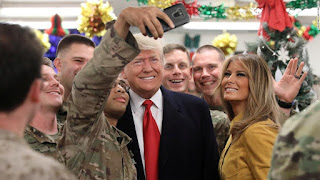 On a day when the "fake news" noted that Trump was the first president since 2002 to not make a visit to the troops, Trump snuck into Iraq to take selfies and complain about Democrats. Sure, it might have been in part to offset the looming news that his purported "bone spurs" explanation that kept him out of Viet Nam (as opposed to a "high lottery number") was just a convenient falsehood. Or maybe it was just to keep Trump occupied and not Tweeting while the stock market corrected itself back to the black.

I don't know what the rationale was for Trump making the journey, and I imagine that for those servicemembers that think Trump is a straight-shooter, this was a fine thing. It was a sign that he and the spouse cared enough for them to show their faces, even if Trump was now telling them that the Syria pullout meant that those stationed in Iraq would now be the folks responsible for action in the event that ISIS went on being a thing. But he explained this in his best trying not to be an entire crass orifice way, by suggesting that other countries were getting away with giving so little while we give a fuckton. "We're no longer the suckers" he explained, while negatively characterizing the entirety of their previous mission.

We're a different kind of sucker, I hate to interject, but feel might be necessary. We're certainly different if we're now taking cues from Turkey and Russia and Saudi Arabia, instead of necessarily guarding US interests first.  He spoke out against Democrats and signed hats for military members, which in actuality, makes this thing more or less a campaign rally, rather then a simple holiday message from a CINC. Of course, he had to make a Big Lie about being the president who gave the troops a raise for the first time in a decade, and overstated the raise by rather a bit, because he lies all the time. And then he used a video on his social media to politicize his visit to the troops and wound up inadvertently giving away secret ops data regarding the Navy SEALS.

Eh, but these are just the kinds of things we've accepted Trump is going to fuck up--right? On the whole, a day when Trump is only a total op-sec fail and an apparent click-whore, is just fucking Wednesday. I hope the troops that are Republicans enjoyed and learned from their up-close and personal Commander in Chief visit. I already have an idea how any liberal leaning troops might have felt about it. And I don't envy them.

Nope. He almost certainly did NOT compromise a Navy SEAL team. Lots of clues to who those guys are right in the picture. Easy enough to check the story:

No. He did NOT compromise the identities or location of SEAL team 5. It takes very minimal research to determine that those are Air Force SpecOps troops, most likely based there at al-Asad.

1.) Wrong Camies for SEALs. Those are the AOR1 Digital Desert camos - it's not unheard of for Navy SpecOps to wear them, but it would be very odd.

2.) The only person with a Naval Special Warfare insignia - the SEAL Trident usually referred to as 'The Budweiser' isn't in that picture at all, but is sitting with the President at the table.

3.)Equipment. The SEALs haven't used the antiquated AN/PVS-23 NVGs in many years. They use the Level 3 GPNVG-18 ANVIS system, and have been using them since before the raid that killed bin Laden.

4.) You see any beards? It's true, Navy SpecWar operators aren't REQUIRED to wear a beard, but how many of them to you see without one? Here's a dozen supposed Navy SEALs and they're ALL clean shaven?

There are a number of other clues, but you get the idea. This is an Air Force Special Ops team that happens to be based where the President went.

I will defer to your better knowledge, because I'm just relying on the suppositions made by MSNBC and CNN experts (which could be biased or just made too hurriedly because of the demand for instant tv news opinions) that it appeared that he had done so--but just giving it a civilian think, it would be on people actually trained to maintain cover to stay out of the spotlight. Even if I do suppose the Trump crew of being capable of screwing up a one-car funeral procession, there is something about the SEAL team chaplain announcing himself being a bit overt (as opposed to people trying to be covert). Of course, now that it has been alleged (based on poorly communicated info?) it will stay a part of left criticism of Trump because that's the way of things. So that gives us one less thing that Trump and company screwed up, but I will raise them that Iraqi legislators have now proposed clearing the US presence out again.

Trump still doesn't seem to be able to do the right thing in the right way.