Conflicted Because I Know My America 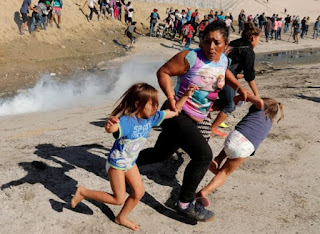 This is the family most often seen in the Twitter protestations against the teargassing of asylum-seekers at our border: they are a real family, not some staging or crisis actors, no matter what the fringe wants to express. A real woman and her barefoot and diapered kids. The world they escaped from has its horrors, and letting hope lead them to a place made politically inhospitable is a cruel joke of the cosmos.

But this America was never fully hospitable, and I equally want to utter my fullest condemnation of Trump's policies and yet acknowledge we have been failing to be welcoming. This border conflict is a stage Trump made, knowing the caravan was coming, there was a choice between upping the capacity for welcoming and processing asylum-seekers and choosing to aggressively man the border and then issue propellants laden with internationally-banned chemicals.

We are okay if we teargas our own. We teargas drug houses and suspected drug houses and protesters for free speech and against war and other crazy shit. We flash grenade the cradles of babies. Use of rubber bullets and teargas have been known regarding immigration protests.

Saying "This is not the America I know" means not knowing this America, the home of the scared of ladder-climbers, the land of social quakes. I am not the type of fool who can't differentiate between the use of teargas by a lone border patrol agent in 2013 inside the US border, with a concentrated effort to fire teargas into Mexico to deter the caravan of asylum seekers, but I will allow there is something already suspect with teargas so long being part of our border defense. We at once legally allow asylum-seekers to arrive at a port of entry to be processed, and establish hurdles, just as if the language of Fox News, the Lou Dobbsian lexicon of invasion and infiltration, meant more than the cry for mercy borne of genuine privation from the people who would set out in such a way, leaving everything behind.

My fear is not from them but for them--they need a lot, and our people are perhaps too hard-hearted by now to know what they can and should give to the stranger who is not so different from oneself.

Our asylum treatment of children has surely evolved. That does not mean it became better.

But this country stays murderous against those who are poor and those who labor. Are we still the great nation these people who travelled so far on foot hoped for? Are we a land of opportunity or scarcity (and who decides who gets what, anyway?) Can we find a place for doers and believers, or is our reputation as a place for dreams so much trash?

I wish I knew. But I would rather we retain a reputation as a land of opportunity, than a land of punitiveness.

Posted by Vixen Strangely at 1:33 AM

The United States of Shithole is the capital of White Trash World. We're Number One!

What is the name of the group of psychopaths that you call "we", and why did you become a member?