This TrumpWorld Grab-Bag Has Security Issues 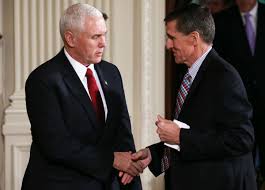 There are a couple of recent pieces of this TrumpWorld saga that interest me as being of a specific national security concern. One of those things is the knowledge that the Trump transition team was specifically looking for options for secure communications that were encrypted and opted for a program that enabled the record to be deleted. There's something about this that itches the back of my brain: like Jared Kushner's attempt to secure a backchannel with Russia using their facilities, it sort of looks to me like a way for communications to take place without intelligence agency scrutiny. I can think of reasons why the Trump Transition might have wanted something like that--they may have knowingly being having communications that were of an illicit nature, such as conspiracy to subvert federal elections regulations with respect to material aid by foreign governments or possible Logan Act violations, or maybe they just already knew that there was some potential that communications with actors on behalf of Russia might be subject to surveillance since they were already apprised that there would/could be investigation into any attempt of infiltration by specifically Russia into their campaign.

It's tough to figure out what the Trump Transition team was after, but it does look like, soon after the Flynn contact with Kislyak, White House Counsel Don McGahn pretty much already suspected that what had taken place had serious legal ramifications.  I can't help but think he might have felt a duty to inform the principles in the White House transition--Trump and Pence. But Flynn was made National Security Adviser anyway. He wasn't cut loose when former Acting attorney General Sally Yates informed the White House that Flynn was very compromised, but weeks later when that story went public. And I am not clear on the timeline of when McGahn was checking out "how screwed" Flynn was--before or after Yates' heads-up. (That would be important to know, right?) But if it was before?

It would seem to me like more people knew what Flynn was about and he had consent if not authorization. From...?

You can see where this is going. Anyway, this kind of fascinating info is being unearthed while House intelligence committee chair Devin Nunes, who is supposed to be renounced from all things Russia hacking-related, is part of the push to investigate the FBI investigators.  This is the same cat who played run'n'tell with information obtained from the White House to obfuscate the House investigation which resulted in his recusal. And many people saw through it, anyway. And keep in mind--Nunes was part of the transition and has his reasons for wanting these investigations to go away.

I also think Pence was in the loop. If nothing else existed to tell me this, I only needed to hear Pence's bizarre Trump adulation that bordered on blasphemy to wonder what kind of mortgaged-souled human talks this way. He might be relying on Trump's good mood--I think a lot of people in the White House sometimes feel insecure.

Posted by Vixen Strangely at 2:26 AM