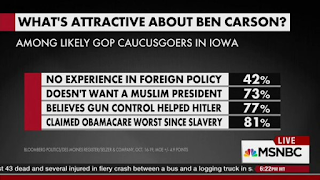 It is very reasonable to try and look at why soft-spoken political neophyte Dr. Ben Carson has risen above very loud-spoken political neophyte Donald Trump in the Iowa polling. I think his rise in the polling is fascinating particularly because even while he is mild-mannered, he says things that are way weirder than The Donald's output. It turns out that Iowans like Carson because the things he says are ridiculous. They like their candidates fringy. You take some random fringy thing he has said, like Obamacare is worse than slavery, and instead of going "Hey, slavery was not cool, and besides, covering our fellow-American's health care is basically decent", they love him because they were thinking that thing!

I wish this surprised me more, but it's kind of in line with the whole "Obama was responsible for the Katrina response" polling, where people actually agreed with a completely non-factual statement. It's almost impossible to plumb whether the respondents agree with this untrue thing on the basis of sheer ignorance of facts, which should be impossible given how recently it occurred, or whether they have partisan impulses so overwhelming that facts simply do not matter.

In part, and no surprise, I blame FOX Mushroom Farm a lot for this state of affairs by purporting to be a news organization that somehow leaves people entirely less well-informed. I also in part blame Glenn Beck, because Ben Carson sounds like a guy who learned everything he ever knew about public policy from Glenn Beck rallies. Take the Cleon Skousen connection. Where in the world does one find this weirdo Bircher guy that would probably be shunned by the upright Yale or Harvard National Review types of the 1950's?

It probably doesn't even matter. Nancy Letourneau identified the immediate problem with this level of epistemic closure.

Why wouldn't Iowa right-wingers pick a candidate who is way too nonsensical for the general election? What sensibility is stopping them? Do they even acknowledge Blue staters exist? If Bill Buckley is spinning in his grave over the idea that conservative voters come to pick the most conservative candidate, over the most conservative candidate who can win, I can only sigh. I don't like watching this anymore than an educated conservative would--because this is a reflection on our country. Partisanship has overrode common sense for too many people--and for what it's worth, some people think the nonsense coming out of Ben Carson is "common sense". It's not common, and it sure isn't sensible. They don't see the crazy because of the mellow.

Otherwise Ben Carson should totally win all the primaries. Are you kidding me? As a Democrat, he's my favorite pick. And for another thing of course he gets all the Secret Service protection. He is definitely viewed as dangerous by secular progressives (I'm totally one) . Maybe it's because of how he would monitor the activities of government employees. Or how he would monitor the "biases" of academics. Yeah--nothing politically correct or tyrannical about those prospects .

Would Iowans or right-wingers even care he is completely unelectable in the general election because he is basically totally unqualified? That matters. I want a functioning government that fixes shit because I think democracy should work. I think that's what the founders intended.  It shouldn't run on conspiracy theories and hissy fits. Ben Carson should be a throw-away vote. But whatever.