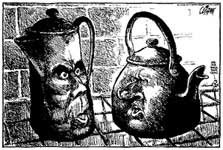 but they sure do love the Constitution.

Two-thirds of supporters of the conservative Tea Party movement believe the government should be able to tap people's phone conversations and profile people based on race or religion, according to a new poll from the University of Washington.

"Our survey suggests that among tea partiers, there's less dedication to certain civil liberties," Christopher S. Parker, a UW assistant professor of political science who leads the 2010 Multi-State Survey of Race & Politics, said in a statement.

The survey of more than 1,000 people took place in seven states, UW said. Six of them - Georgia, Michigan, Missouri, Nevada, North Carolina and Ohio - were battleground states in the 2008 presidential election. The seventh, California, was included to represent the West Coast, the school said in a news release. The telephone poll was taken Feb. 8-15. The margin of error was 3.1 percent.

So, freedom's just another word for nothing left to lose, because we already gave our civil liberties away--but we want to keep our illusions about being free by being militantly opposed to the government helping us in exchange for our compliance--if you are a teahadist. In consensual reality, freedom is purchased by being continually aware of the encroach of censorship, extremism, and dogma--kind of like the stuff the wingnuts in the teaparties seem to represent all the time. 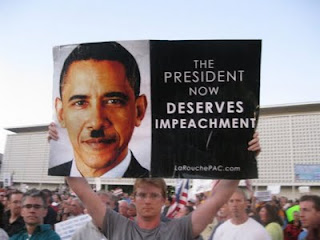 Since all this intrusive PATRIOT-act mess that limits speech, freedom, and expectation of privacy, was mostly brought to us by the letter "R", and since they like the tyranny after all, maybe they could stop with the Hitlerization of the democratically-elected president who, as a Constitutional scholar, might actually restore our nation to what the Founders intended. Which isn't what we had been doing, with the secret prisons, the torture, the pre-emptive invasions, the double-talk, under the Bush-Cheney Administration.

It might be a start in refreshing our national dialogue if tyranny itself was better understood--and Obama isn't a tyrant by half. Or we'd have had tea party protestors in "free speech zones" who were openly hassled by "the man". And they would be the ones investigated, shunned, labeled--but they aren't.

You're free to be wrong, teahadis. And you are.
Posted by Vixen Strangely at 11:45 PM

one thing that has always bugged me about people like this, is that they love to cry "Big Government!!" when it comes to things like welfare, a public-option or single-payer health care system, etc... anything put in place as a safety net.

yet, in the same breath, they'll demand mandatory drug testing for welfare recipients, and support increases of police power to search citizens and demand "papers"...

you just can't argue rationally with people like this.