Cages Where Sick Babies Sleep on the Floor 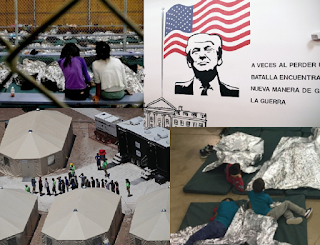 There's a weird familiarity I feel with regards to the recent argument over whether the term "concentration camps" should be used regarding the detention centers where the US government is currently holding undocumented migrants. It's not that long ago, really, that former DHS Secretary Kirstjen Nielsen was raked over for disputing whether "cages" was the right term for the wire holding pens in which children were being kept.

But leaving aside the semantics of "dog pound" and "freezer" and all that, the facts are, themselves, very grim. There are children without their parents in filthy, miserable conditions, being asked to watch after younger, more miserable children.  Conditions that children (and adults) are being held in are ideal for the spread of disease and the potential for preventable deaths.  The family separations, and even the process of reuniting families are handled indifferently with shitty logistics and negligence bordering on the insane. Whatever one might prefer to call the conditions under which human beings are being kept, they are inhumane.

And yes, despite what no less an expert on inhumane activity as Rep. Liz Cheney is might claim, it is very reasonable to call these shelters "concentration camps."

The messengers, here, are part of the problem for me, too--this is where the familiarity really sets in. It wasn't that long ago that Liz Cheney was extolling the virtues of what she would call "enhanced interrogation" techniques, and simple bloggers like myself would call "torture", with its embrace of tactics like "stress positions" and "rectal feeding."  Euphemizing horrible things to try to make them palatable is. itself, a form of abuse. It's gaslighting. It's telling all of us that our eyes and ears and minds aren't working right--that we are crazy for thinking there is something seriously wrong with seeing a problem with cages where sick babies sleep, or try to, on the floor, or that a system that hides the deaths among its inmates is trying to minimize its violence, or that is staffed with people who use dehumanizing language is unable to humanely deal with a humanitarian crisis.

What I can see is that when the Trump Administration argues that soap and toothpaste and bedding are too much to provide detained children, we are seeing people who have no concept of duty of care regarding their fellow human beings--even the smallest and least offending among us. And while it is true that facilities are overwhelmed, how can it be that this much is not viewed as inhumane--when it is asked of children that they rest on the concrete on as much space as a severely overcrowded area affords (sleep deprivation has been used as a form of torture) and somehow stay healthy when little basic hygiene exists?  When people are denied their reproductive rights for political reasons?

The US is housing migrants now where we once kept Japanese-American citizens during WWII. The Trump Administration has also considered keeping migrants at Guantanamo Bay.  The number of migrants coming to seek asylum or work or anything else here has not abated because of the administration's deterrence approach, and the decision to cut aid to Central America only seems likely to make things worse.  (And I'm not saying the Obama Administration had superb answers about what to do with detained migrants and asylees either--they deported at a greater rate than currently, conditions in facilities were also not ideal.)

The argument over whether to call the facilities "concentration camps" just seems to be one of throwing words at a physical and immanent issue. There are some people who can be moved by words. The people who most need to be, will perhaps already be beyond shame.  And have been for a long time.

It is useful, however, to see who falls into which group.

Posted by Vixen Strangely at 3:43 PM

At the very least, it's willful negligence that endangers the welfare of minors, a felony in most states.

It's also child abuse in concentration camps, but what do I know?

Where are all the Mad Mothers ? oh yeah their still tightening drunk driving laws.
Where are all the Latinos???
Where are all the parents who don't abuse their children? Or ALL the people with any heart?
So I'm inviting 250 million of my friends and neighbors to protest anywhere and anyhow you can on July 4th to get your fair share of abuse! Washington, DC anyone?

Concentration camps is the correct terminology and it is an atrocity what Trumpenstein is doing. It is the 45th Dotard's problem, he owns it and he created it.