An Argument for Religious Freedom 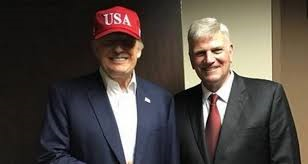 Recently, Franklin Graham, the late Rev. Billy Graham's Islamophobic and homophobic scion, challenged Pete Buttigieg for referring to himself as a gay Christian because to Graham, it is not possible to be both Christian and gay.

This is not news to millions of gay people who actually consider themselves Christian--of course, they've heard at one time or another that they are imperfect in their beliefs if they don't also hate themselves. It might be news to Graham that their religion, and freedom to practice it, is no less valid than his own and that it isn't actually up to Graham to decide who gets to call themselves a follower of Christ.

I don't follow religion, myself, and struggle with the textual smarty-pants tendency to point out this passage or that to refute the fine print gatekeepers who want to reserve their own slice of heaven, for the price of striking off others for whatever scape-goatish reason they are so inclined. It's truly not my god and not my book, and as far as one person's interpretation of it goes, it's probably not even my business--but to that extent, it isn't really Graham's business to monitor someone else's religious rectitude, either, as if only one version of the Bible even existed.

What we do have in common, as Americans, is the First Amendment. It seems that Graham would prefer to have his interpretation of religion override what others hold to be true, and even would ask that the government agree with his interpretation to limit the rights of others to follow their non-harmful life choices, such as marrying a consenting, adult partner.   But religious guidelines can dictate what to eat and what to wear and how to discipline one's children and on and on--the problem is to what extent any religious person's mere opinion should hold weight over another person's pursuit of happiness.

Or maybe it isn't a problem at all--Graham just wants to cause trouble. Pete Buttigieg is as free to be a gay Christian as Graham is to be a bigoted one because he accepts Christ as central to his faith. I'm a happy little atheist because why not? But that sort of assumption that freedom of religion can mean freedom from having one's rights impinged by another's religious view isn't as common as I suppose it ought to be. I can't help but think about the times I've seen Tony Perkins or Brian Brown or some other "true religion" type being treated as if their view--imposing a specifically scriptural interpretation on LGBT people's right to marry, adopt, or even exist, as if they were perfectly ordinary--and not actually peculiar sectarian extremists trying to impose a sort of Christianism on other folks. Especially when this kind of judgment and imposition of religious bigotry does societal harm.

Graham is a Dominionist, who fervently believes that the First Amendment truly only applies to him and his cult. They truly want to institute the same kind of savage theocracy that ISIS does, only in the name of their religion. They won't be throwing gay people off of roofs, though, because burning them at the stake is more their historical speed.