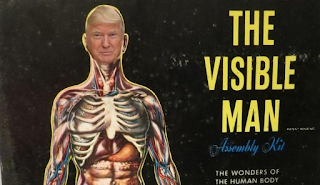 So, I guess what you might say is Trump is very transparent....about the things he would prefer you don't see. You can always tell where you stand with Trump by the specific things he would actually directly tell you he prefers to remain hidden.

And he actually does come right out and say things he would rather you believe at times, like just a bit ago, when he mentioned a thing in the Mueller report about former White House Counsel Don McGahn. 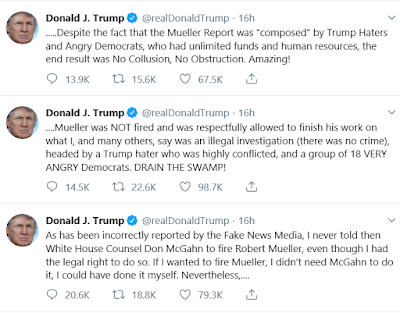 So, Trump is trying to make it very clear that Mueller was NOT fired despite being surrounded by Angry Democrats (of whatever ever-changing number they may happen to be) and he explicitly denies first of all telling McGahn to fire Mueller, because he could have (could he?) done it himself.

In other words, Trump is trying to use Twitter to make a kind of legal case for himself and to prop up his glum ego--it is sad to be president and know people steal letters off your desk or pretend they will do things you ask them to, but actually won't because they can wait until your mood is better and hope you forgot.

It's probably not exactly true that Trump is a transparent president, but it is pretty much the truth to say you can see through him. He exposes himself like a series of selfies, or a parted trench coat.

But why particularly focus on Twitter on McGahn, when the thrust of the Barr-created narrative should have been that he did not obstruct, but here he is, Tweeting about one of the more egregious examples of potentially suborning perjury and interfering with the investigation? Eh--transparency! You can't help knowing what he's thinking about! Could he have just not mentioned it in any format? Yes, if he wasn't this boy, right here, asking you to love him.

The downside is we can also get up close and personal with Trump's really dark side, because he doesn't hide it all that well. He really did plan to "lock her up" with respects to Hillary Clinton. In his recent interview with Sean Hannity, he went on about Page and Strzok, Clinton's emails, and continued harping on the never-verified wiretap claim. You can see his state of mind--he wants to either pretend he is being railroaded out of office whether he is subject to impeachment or even if he legitimately loses an election. He wants to be a victim like the pitiable little snowflake he is.

Is it not so unfair that as a public servant, he needs to be held up to any public scrutiny? Is he not the biggest martyr? Pity him and the rigged system that has thwarted him by....making him president, even if he is a know-nothing racist goober.

Anyway, he says he's transparent, but I can see him. I see him alright.  And so can journalists, which is why I guess he really hates the news media. So transparent--in how he prefers not to be seen.