What Good is This Practice Violence? 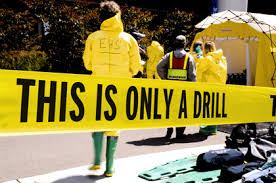 Last year was apparently the worst year for school shootings in the US, with 23 incidents which left 113 people killed or injured. Because our relationship to firearms in this country is what it is (unlike, say, in Australia, or in Scotland, or in New Zealand) we have addressed mass shootings with training in the schools to habituate students to the idea that school is a place where they can die, and that it is pretty much on them to try and do something about it.

That might sound like a cold and biased interpretation of what some people surely believe could be a lifesaving education in survival. I just think that there are reasons to believe this security theater is innately harmful. What is this telling kids about their world and themselves? What is it telling them about what school is when this stressor is added? School should be a place of safety and learning, but this demonstration not only informs them that school is an unsafe place, but fear interferes with learning, and the lesson plan is revelatory about one's own stress-reactions, and not in a helpful way. The "Hide, Run, Fight" recommendations don't always address how human nervous systems respond to confrontations, which naturally tend to "fight, flight, or freeze", leaving kids feeling inadequate when they react with natural fear and surprise in the ways their bodies were almost hard-wired to do.  The scenarios don't address how marginalized students might uncover how much worth the school system thinks they have in the cruelest possible way.

But the most unconscionable story I have heard regarding this conditioning experiment in getting teachers and students alike to assume that schools should necessarily be a place of violence as well as learning, was this story from an Indiana school where teachers were taken in groups to be shot "execution-style" with Airsoft guns, causing bruises and even drawing blood. And potentially setting up the psychological PTSD hellscape where these teachers now view their job as a place where they were violated and no longer feel safe, because their school system did this to them. And their students may very well draw a similar conclusion.

The trauma that school shootings do lives long after the event has passed. Just this week, a student from Parkland who survived the mass shooting killed herself because she found the classroom setting too fraught to keep up in, and felt survivor's guilt.

You can't drill that away.  Why in the world would we be going out of our way to create better victims, when we could be trying to prevent shooters at all?
Posted by Vixen Strangely at 12:34 AM