This Relationship is Problematic 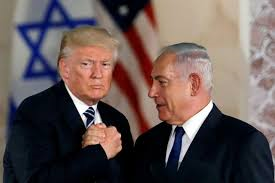 Not in a BDS way--it's just that the way the Trump/Israel thing is playing out is a little too close to evangelical apocalypse stuff, you know?  I get that Trump has a strong relationship with Israel, but also a strong relationship with his evangelical supporters, and, well, the thing where they speculate that he is here to fulfill prophecies to me is pretty worrying. But when actual Trump Administration officials like Sec. of State Mike Pompeo say that Trump is here to fulfill prophecies out loud, that's really too much. So, I don't know if they want to see Trump as necessarily a King Cyrus, or as a Queen Esther.

I just think this is a weird conversation to be having at all. Trump is doing stuff his base wants; it's fan service, not prophecy-fulfillment. His Secretary of State speaks fluent evangelical, and is more than willing to signify to the churched that this is a religion-friendly administration.

Color me deeply skeptical, though. Bush was willing to drop apocalypse-signifying stuff too. I can't say how serious that was either.

But this is where those kinds of religion-signifying things often dwell, right? Said out loud, but daring you to sort out whether they are intended seriously, or not.
Posted by Vixen Strangely at 2:18 AM