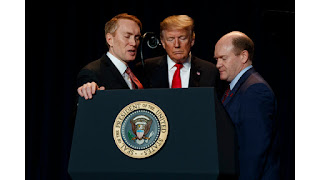 One of the things that strikes me as astonishing about Trump's biggest fans is that they may even know that he is actually incurious, ignorant and lazy and basically spends the first five hours of his day watching news shows and Tweeting shitposts but on a spiritual level, they don't care. The real Trump, the one that pays off porn stars or cheats his employees and the government, is nonetheless "good for the evangelicals" that make up a strong part of his base. It reminds me, in a way, of how George W. Bush (in standee form)  was made a literal item of worship for the kids in the documentary "Jesus Camp".

The president may be fake, but the worship is real. Ish.

This is why Trump can assert, in the midst of a flurry of pious falsehoods, that he will never let the folks assembled at the National Prayer Breakfast this past week down. He won't, because they won't let him let them down. They will believe in him, because he is improbable and could only happen if God willed him.  (But then again, folks, some believe God willed Hitler, so...YMMV.) And he can also gaffe and state that people of faith can be celebrated for the "abolition of civil rights".   (But is that just a gaffe, or is it more of a Kinsley gaffe? Because while the modern religious right likes to pretend they always convened over something like, well, the "right to life" , which is nothing to do with the rights of mothers with respect to prenatal health care or maternal mortality or even doctors, nurses, or patients at reproductive health care clinics for whatever reason when harassment, closure, or even terroristic threats and actions may be concerned) but probably has a lot more to do with the kind of white nationalism Trump more or less advertently espouses.

And all of this makes it a fine time to take note of how the National Prayer Breakfast was used to insert Maria Butina into the right wing social circuit because as luck would have it, the RW evangelical set had gotten a bit of a crush on Putin, and well, it was for the kinds of anti-Muslim and anti-gay things you might think. (Consider the relationship of Scott Lively to anti-gay laws elsewhere in the world with Manafort picking Mike Pence to be Trump's running mate--a guy who basically tried to make segregation for LGBT people a thing. This is the religious right in the US influencing and being influenced by an authoritarian current in the world.)  But this sort of thing becomes very awkward when it is revealed that Maria Butina was in favor of arming anti-American, pro-Russian Crimean separatists to be totally acting in self-defense and Paul Manafort was still working on Ukraine politics even after his indictment.

This really makes me wonder to what extent the religious right here in the US is letting their hot buttons about things like LGBT marriage and participation in the military and telling women they are murderers for having fetuses they can't carry to term or will to live even if they desperately wanted to, has them choosing to ignore things like absolutely naked corruption and graft.  And how this lets them ignore detailed documentation of the real money-grubbing connections, soundly and roundly lied about, between Trump and Russia even during the 2016 election.

This isn't even really about how Russian adoptions or the placement of South American children in the care of an agency connected to Betsy De Vos--except it is--about how the religious right concerns (like raising the theocratic children of the future) can influence US policy in ways that immiserate  millions, undermine US democratic institutions, and work with foreign influences that don't have the best interests of our republic at heart whether because of apocalyptic (it doesn't matter because we'll all be dead in the long run" or absolutist (destroying current day America to create a better, more pure tomorrow) reasons.

The Trump Theocracy isn't strictly religious--but it has aspects of a cult, with hidden knowledge (Q Anon) and shunning of family and friends who aren't on board. Reinforcing the god-cult of infallible Trump seems to be an important part of conservatism at the moment, with many Republican figures assumed to be sane mouthing words that make no sense except as respecting Trump as a kind of sacred figure who cannot be criticized. Which is absurd and demeaning--he is a man, elected for a four year term (barely) and can obviously be challenged.

Unless his installation as president had an indispensability for some force, somewhere, that had nothing to do with his actual competency for the job, which still appears to be slight to nonexistent.  But about that, I can only assume this serves the highest bidder based on the swampiness of Trump associations.

Hey Vicky! How is life on Neptune?

Geez. You might try listening to the first third of Trump's SOTU. He outlined some of the many accomplishments that his administrations had made.

Really, you should add Breitbart, Daily Caller, and maybe Instapundit to your regular reading. The right has been lauding Trump's many accomplishments a long time, and I can only assume that you don't get out of the left-wing bubble too often.

If he turns the other cheek I'll do it again.