Jeff Bezos Does Not Have Time For You, Pecker 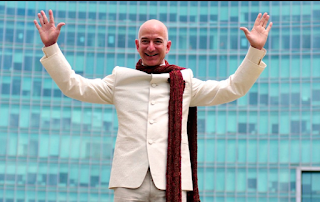 On some level, I think the epic news that AMI (the media company that is David Pecker's joint, which includes the National Enquirer, which could have been fuxxored over Trump bullshit but apparently is staying on their bullshit,) actually this late in the game, even thought of trying it with the richest man in the world (give or take) is some amazing commitment to the business model. I mean, seriously?

Is AMI trying to screw with Bezos because of Trump's regular war with Washington Post  and competent journalism in general or is it because they are being ink for hire for MbS because WaPo naturally has an interest in the death of Jamal Khashoggi? It doesn't freaking matter and Jeff Bezos doesn't freaking care about anything but guess what--you picked the wrong guy.

Well, that got my attention. But not in the way they likely hoped. Any personal embarrassment AMI could cause me takes a back seat because there’s a much more important matter involved here. If in my position I can’t stand up to this kind of extortion, how many people can? (On that point, numerous people have contacted our investigation team about their similar experiences with AMI, and how they needed to capitulate because, for example, their livelihoods were at stake.)

In the AMI letters I’m making public, you will see the precise details of their extortionate proposal: They will publish the personal photos unless Gavin de Becker and I make the specific false public statement to the press that we “have no knowledge or basis for suggesting that AMI’s coverage was politically motivated or influenced by political forces.”


And long story short, you can display pics of Jeff Bezos' dick all you want, but no camera can encompass the size of his balls. He told his representation to look into this shit but to not even preoccupy him with it because that wasn't even his biggest concern.

I don't love your labor actions always, Jeff Bezos, but for telling the blackmailers to go eat shit you have my admiration, because sextortion is the lowest of the low, and no one should put up with that shit and watching Bezos end the National Enquirer for just being shitsacks is entirely my brand of "here for it".

Posted by Vixen Strangely at 1:30 AM