TWGB: Accountability in the Age of Shenanigans 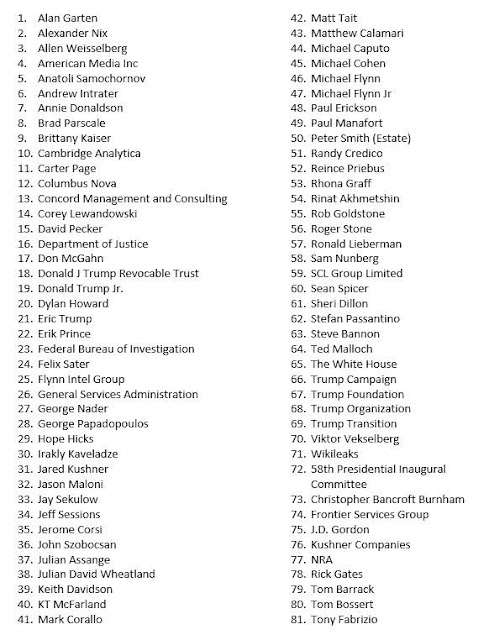 This long list represents the first round of letters requesting documents in an attempt to nail down information that has been previously requested, that pertains to already-existing lines of inquiry, and that shouldn't really surprise a damn soul who has been paying attention. This, despite the grumblings of certain members of the GOP, does not represent a "fishing expedition" because the requested information indicates that Nadler and others in the House know very well what they would like to know more about, and this is because all signs point to specific kinds of fuckery having been afoot. Take requesting docs from Sheri Dillon--who stood in front of stacks of file folders and told us that Trump ad a plan to turn his business interests over to his sons (and I don't know about you, but I think he's still deeply interested) and who claimed Trump was under IRS audit, a notion recently contradicted by Michael Cohen's testimony--it makes sense that these lines of inquiry exist.

It's called "accountability", and USA Today has a very nice and comprehensive opinion piece from Jill Lawrence that details why and how we're finally seeing some accountability from Congress in tracking major discrepancies between what Trump himself and the people who surround him have said, and facts pertaining to actual wrongdoing. The broadness of the requests should not be taken to mean that a "spray and pray" approach is being taken, but rather, there is a wide-ranging pattern of obfuscation, withholding, denial, delay, and, well, shenanigans, that require Congressional oversight so that we can get accountability.

One of the things I've noted about the rise of Trump is that those who support him and whom he has relied upon are actually the world's worst people, and attract even more really bad people. Jerome Corsi, birther conspiracist (as was Trump) is on the list. He recently made an apology of sorts for spreading the unfounded theory that Seth Rich, a DNC staffer who was murdered, may have been responsible for the DNC leak, not Russian hackers. This claim has now been pulled from InfoWars.

But you know who hit that Seth Rich claim pretty heavily--Sean Hannity (who either was a client of Michael Cohen or wasn't, depending upon how Hannity feels about attorney/client privilege on any given day). Julian Assange/WikiLeaks promoted that theory, too--and Assange is obviously on the list. Hannity, of course, is a big star at Fox News, whose relationship with Trump is well documented in Jane Mayer's latest at The New Yorker. Assange, of course, has been contradicted regarding the Seth Rich lie by the indictments procured by the Mueller investigation against a dozen Russian intel officials for that crime.

Roger Stone is also on the list, of course. He's in a bit of trouble because he seems to have violated his little old gag order by posting nonsense on Instagram and by having a book excerpt out where people can see which is not at all the sort of things he was supposed to do.

And we could go on and on. Trump is subject to, as far as we know, 17 investigations, in many of which evidence of wrongdoing by others is already determined, and implications for Trump and his family are already strongly implied. There are people on this list who have already spoken before either the House or Senate intelligence committees and quite probably lied. Documents are being requested here for good reasons, and this is, truly, just the first round.
Posted by Vixen Strangely at 1:24 AM