What the Hell Are You Doing? 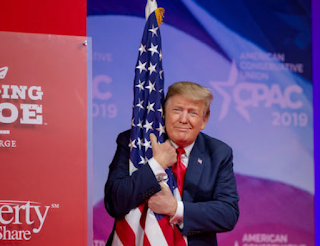 I'm not sure if this is going to be a regular feature, but I've had a lot of quick hit "WTF?" kinds of posts bouncing around in my brain, so it just made more sense for me to do them as a "round up" and with the 2020 elections coming up, I can definitely see this becoming "a thing".

Starting with the above, Trump gave the flag some affection before launching into a two hour two minute batshit extravaganza at CPAC (which is already kind of a guano pageant). I seriously have to wonder if the length of the speech has a lot to do with his disappointment about the NK talks and the impression left by the House hearing with Michael Cohen--big-ass rally speeches seem to be one of the ways he self-soothes. So what happened when Trump went full-on Fidel Castro up there?

Weeeelll, he re-enacted his calling on Russia to get Hillary Clinton's emails, because we all obviously need to be reminded of that. He introduced a G-rated nickname for Rep. Adam Schiff--"little
shifty Schiff"--which kind of makes me think he slipped Baron a fiver to come up with it and this is now also Schiff's new rap name: Lil' Shifty. He did an impression of Jeff Sessions that sounded a little like Yosemite Sam. He managed to shoehorn some stuff about little migrant girls eating fistfuls of birth control pills (not the way they work) before going out to visit America by crossing rape country, calling the left socialists, and making some "right-wingers on college campuses are the real victims" nonsense noises into a (probable? potential?) executive order. Maybe. And he apparently talked to a General Raisin Cane, which sounds like the kind of creative hallucinations I would like to have if I was a sweaty ham that was made a world leader and had snorted too much Adderall.

Anyway, I don't know what the hell he was doing, but he seemed to have fun, even when he verbally had to say no one was leaving the speech even though there was a line. The flag has now contacted Gloria Allred.

Also at CPAC was Van Jones, who I used to think was pretty cool, but then he would do things like....attend CPAC.  He made a really weird elaboration on the left wing-right wing analogy to the effect that he never saw a bird fly with only a left wing. Ok. Well, maybe a bird couldn't fly with one wing, but you could have a building with two wings and one wing is fine and the other wing needs to be closed off because there was a major leak in the bathroom plumbing and now there's this smell and toxic mold and bugs and everything.  And guess which wing Jones decided to camp out in for a minute and applaud their temporary moment of sense regarding prison reform despite the long history of being not right about all the other stuff?

I have a good idea what the hell he was doing, but it really helps exactly no one. Well, maybe one.

Joe Biden is running for president, or not. I don't know why this is so difficult--Biden has done Democratic primaries before. And he has great name recognition from being someone else's vice-president so he is not a stranger to the national stage. But there is this thing where he didn't do well in previous primaries, and he has a reputation as a gaffe-machine. Case in point: he said current Vice President Mike Pence was a decent guy.

Seems like an anodyne remark? No! Damn it, Joe, read the goddamn room! Pence is a bigot. Full stop. If you needed to look any further to discover signs of Pence's perfidy than being Trump's running mate, anybody, and I mean anybody, could give you a rundown of his nonsensical positions and harmful policies over the years.

I expect I will have a handful more "what the hell" Joe Biden things on deck if he does run.

Beto O'Rourke is apparently fixing to run for president in 2020 (not that he's officially announced) instead of trying out John Cornyn. Which is ok. I guess. I mean, Joachin Castro could run against Cornyn, and that would be cool, but still and all.

What the hell? Why don't politicians do the things I think they ought to do instead of the stuff I have very carefully rolled 12-sided dice over?

This is just a really little thing, and I could get my behind jumped on for saying it, but Jane Sanders joked about how it wasn't "politically correct" to call oneself a wife and just annoyed the entire hell out of me.  I'm a wife and a big old SJW feminist, and I have no idea what she is talking about. I know; her husband is the candidate and she is in actual fact the spouse, and in a world where we have expectations of political spouses to be performatively excellent and on-point, she does not seem to have an abundance of fucks in general about being that circumscribed political individual, which I should think is great. On the other hand, it feels like a shelf-aged backhand at a former First Lady and political opponent of Senator Sanders who notoriously was not about baking cookies back in 1992, and maybe that's the kind of thing political junkies with a long memory would very definitely get a little hacked off about.

Also saying "politically correct" is kind of bullshit. I don't know if her comments were vetted by the campaign. I also don't know if they were vetted by anyone who would understand why what she said would be vaguely off-putting, which is a problem I have with the folks who surround Team Sanders. I'm not calling them "bros" though.

That would be politically incorrect. But to be clear, Our Revolution seems problematic to me in some ways.

I hate feeling like we're even a little bit about relitigating 2016. What the hell?

And Roger Stone, who has a total gag order about his case, also has a book coming out eventually which is sort of about the case and excerpts are hitting the streets, which is kind of "what the hell" and I don't even care because I still think it's hilarious.
Posted by Vixen Strangely at 2:30 AM

But does Joe Biden believe that Pence is clean? That's a high honor in Biden's book, apparently, since it's what he said about Obama during the primaries in 2008. "Articulate and bright and clean and a nice-looking guy," to be specific.

The Trump speech was like a bad acid trip. I have given up doing anything but laughing in the face of it, mostly because crying so much has messed up my tear ducts, I think.

The rugged thing about Trump's speech that I keep getting back to is--"this is real, the guy with the launch codes and all that, right?" Surely, maybe some percentage of that speech is his version of stand-up comedy because he's in front of his fan-base--but what percentage?


I can't say I speak fluent Bidenese, but I've always chosen to accept the idea of "clean" as meaning "not politically tainted". Obama had the benefit that a younger politician does of not having to walk back currently unpopular positions because of something he did or said in the past (except, I guess, not being fully onboard with same-sex marriage) and didn't have any really troubling or unsavory personal alliances. The GOP tried to Whitewater Obama with Tony Rezko in 2008 and tried to hang Bill Ayers on him like an albatross, but those associations weren't enough to sink him. But calling a Black politician in America "articulate" is one of those cringers--oh really? Because politicians *should* be capable speakers. (Should--as in Obama was dinged relentlessly whenever he used a Teleprompter like virtually every other pol does these days, while Trump is applauded when he uses one, even poorly, because speeches like the 122 minute brainpuke at CPAC might scare the normies.)