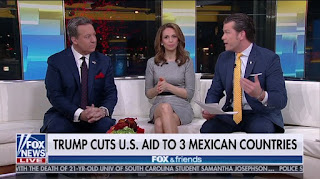 The chyron from Fox News shown in the picture above has not been altered in any way--it honestly did read "Trump cuts U.S. aid to 3 Mexican countries" and wow, that is really something. Of course, it should read "Central American countries", but the chyron writer doesn't care, and the viewers know what this meant--"some kind of foreign".

We could go off and discuss whether cutting aid to these countries will do anything at all regarding the "migrant crisis", but all I really have to submit here is that Trump seems to make some of his policy decisions based on what the little people on his tv set tell him, and unfortunately, he has chosen to watch some of the dumbest people.

Also he hires the people he sees on tv. I guess everyone knows this. It's just...unsettling, is all.

Posted by Vixen Strangely at 9:18 AM

How do we know the chyron writer knew it was wrong?

Good one Li'l. I often wonder if they are secretly busting balls.

Mexican is the new Muslim.

It could be their idea of a joke--say something kind of racist, and then apologize "Oh no, haha, we're just dumb!"