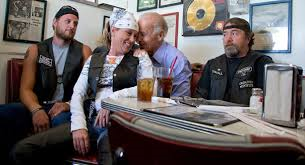 So, I'm going to be upfront about this--I am the wrong person to talk about whether former Vice President Joe Biden is too much of a Handsy McHandserson because I am by nature, sort of hug repellent. I've never had a problem telling non-creepers things like "Hey, just a handshake!" or "I don't do lips!" I am an introvert and have negotiated smooches into air kisses and hugs into back pats on the fly. Look, you can't pull me into the big hug once I've dug my feet in, and if I give the right glare, you never, on the peril of your very soul, think you ever would want to.

(This is entirely different from people who I've consented to be intimate with in private settings, but PDAs from randos are basically a firm limit. Then again, I've had forty-odd years to sort out my boundaries. There are body language treaties I can draw on since forever. And I say "non-creepers" because there are people who do not recognize your clues, but will do physical stuff in private and hands free stuff that are fucked up, and they are not normal, nor would I say one comes across those types all that much.)

That said, I am pretty sure I could telegraph (or even hiss sotto voce) that one ought to not make a lip landing on the top of my noggin or rub noses--but wow. Why are those things even in danger of happening? The top of the head in some cultures is deeply taboo. It's infantilizing. It's the heads of children you touch--to tousle their wee heads to show you are proud of them though they are small or kiss them to tuck them in. That would be children you know very well, and certainly not adults you might not know all that well. I can see someone who is not already hung up about getting touched freezing, and not knowing quite how to deal with that sort of "outsider" physical expression. Rubbing noses is some shit I can't even at all with. Noses are weird. Reputed ethnographic stereotypes about northern indigenous folks discuss nose touching, but this is just not a regular thing I have come across.  I don't recommend it during allergy season. Noses could be loaded.

I don't think allegations about Biden are exactly of a "Me too" nature--they are "me too-ish". What he does physically regarding people isn't sexual in nature, but it is gendered. It is more avuncularly affectionate than many people are with their natural uncles, but it isn't nephews he's showering with noggin smooches and careless kuniks. It's the nieces he's loving to pieces, and that is possibly an unconscious bias, but one that has to be recognized. We've discovered lately that Congress has been stupid about sexual harassment, so many years after Sen. Packwood's scandal, and it's been in a somewhat smoochy and gladhandy environment an older politician like Biden might have formed his ideas about good touch and not so good touch. And those ideas might be as outdated as rumaki and Jello salads. It isn't intentionally harmful in his case--it just isn't really good.

So is this disqualifying? Well, not exactly? It's not so much "bad wrong" as "different culture" wrong, where people have a more clear sense of touch they don't want and so many human resource department manuals all over the country have defined things like these interactions as being so much "nope" here in 2019.

Is it something Biden can overcome--look, he's being late to jump into this race anyway and I don't think, despite the polls right now, that he will do better in actuality than he is doing theoretically. He's got a long history that I can't explain to a 20-year old any better than I could how nose-rubbing would be a thing. You just had to have lived on this earth since 1972 to kind of get it, and even then, it doesn't always make sense.  I'd rather he abstained and stuck with the great things he has done, but that is my opinion.

But being hands-off, after all, comes more natural to me.

Posted by Vixen Strangely at 11:54 PM

Knowing what I know of that culture, as an old Outsider and one of hell's littlest angels, he is overstepping his bounds in that photo, and may well have put her in physical danger.

My space, my bubble, is to the end of my arm, or leg. If you don't want me to hit you, or kick you in the shin and then hit you, don't get in my bubble, my space. Handshake is just fine.

You can't support government and claim to support keeping your hands to yourself.
“A ballot is just a substitute for a bullet. If your vote isn’t backed by a bullet, it is meaningless. Without the bullet, people could ignore the election outcome. Voting would be pointless. Democracy has violence at its very core!” ~Muir Matteson, “The Nonviolent Zone”