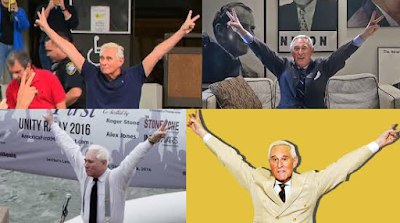 You know, if I could save time in a barrel, the first thing that I'd like to do, is to save every email, text, and random Tweet from Roger Stone until eternity passes away, just to give them to Robert Mueller and fuck Stone the way he would fuck unto others. (My deepest apologies to Jim Croce for my appropriation of one of his tenderest songs. I'd like to think he would have understood.)

The Friday morning fortuitously-filmed arrest of Roger Stone was a great start to a very awkward day in Trump World, but in all honesty, Roger Stone had been hinting that his ass was due for an indictment or a half dozen or so for a good long while. I don't doubt the CNN claim that good reporting was the reason they had Stone's Florida abode staked out, because the day before, four indictments were filed after a rare bit of Mueller Grand Jury activity. (This is why my last post indicated that I knew I needed to clear my tabs in advance of Friday news, because I am not a reporter, but neither am I ever unplugged--RW journos claiming a tip-off for CNN exclusively for some reason are just mad they got scooped or trying to neg the Mueller investigation and the FBI for reasons that are not entirely wholesome.)

But let's get down to the barebones details--in August of 2016, Stone was caught bragging on his knowledge about what Wikileaks might drop. Even this little blog wondered if pimping the Wikileaks thing wasn't just meta-ratfucking from a person who only pretended he wasn't still working for the Trump campaign, and there's been good reason to think Roger Stone always was still "on the bus".  We've got glimmers of what folks like Randy Credico, Jerome Corsi, and Steve Bannon might have given up, but in any event, the so far collected private communications of Roger Jason Stone are amazeballs nasty.

Look, you can tell me perjury is bad and suborning perjury in others is bad, but literally going full "Wicked Witch of the West" and telling someone straight up "I will get your little dog too!" is just some crazy witness-tampering obvious almost fictional villain batshit evil. I will tell you right now, you get an entire posse of two dozen or so entirely for-free FBI just for threatening a man's little floofdog if I was running this arrest operation (complete with warrant for assorted whatever collection).

Which is about what happened, and which could be arguably overkill for some piddly "process crimes"--except let's be honest about what Stone has been doing here. Back to referencing the barebones details, if one is threatening violence, and frankly talking about abusing or leveraging other people to get certain results in a legal matter, that doesn't make them look good. To my mind, that says, you have to look at why they are engaging in these sorts of crimes that specifically try to effect the legal outcome of the Mueller investigation.

I think it's hard to say he'd have been doing these things if there wasn't some truth to the connection(s) between Wikileaks and the Trump Campaign, and their apparent foreknowledge that the info WikiLeaks had was from a Russian-sponsored cyber attack.  Although the indictment itself doesn't throw all the info Mueller has out there (and it shouldn't and for obvious reasons) we can nonetheless understand that Stone wouldn't have been indicted unless he was already screwed by what Mueller had in writing regardless of what Stone, a notoriously unreliable witness, might offer.

Which makes Stone's talk about not flipping fascinating--because this is something Trump has stated he really likes about Stone--he isn't gonna talk. But that sort of implies that there is a something he shouldn't be talking about, n'est-ce pas? The more Stone crows on various news outlets about what he will and won't do, the more it looks a bit like he's either pimping himself out for a pardon or trying to make himself look like a martyr for his legal GoFundMe. (And he isn't, based on his real estate, necessarily a poor man. He's just poor in his political choices, morality, and well, everything else that makes one human.)  Also his head is shaped very amusingly and his hair looks to be sewn-in--which probably adds to the sympathy some are wasting on this peculiarly buff-backed Nixon tattoo-sporting reprobate. But when I hear the RW Tweeters go on about poor old Rog, at age 66, the fact that he looks like  Abe Simpson is all about his life choices and he seems to be the reason weirdos like Loomer, Prosobiec and a score of other internet simple trash exist.

Miss me with any sympathy for this devil.

(Although, and to give him his due, his back tattoo is really quite good and the artist should be praised. It's awkwardly placed and sized, which is entirely Stone's choices, and the tattoo artist can't be faulted for that. But photo-representations of human faces are notoriously tricky when rendered as skin art, and entire websites exist of bad tattoo art to prove that. The Nixon tattoo is actually scaled well, and the features are proportioned correctly and do not look like a bad caricature. A piece of art like this would probably be better served on a bicep or, as a back piece, be larger. Located where it is, it's not somehow tattoo-correct. I guess a similarly-sized Nixon tramp-stamp would be far worse, of course. Maybe he could have it elaborated upon with borders of US flags or some shit when he goes to his eventual incarceration--because none of these minions even know how stingy Trump is gonna be with these pardons. He will want proofs of loyalty beyond your wildest indulgence. He's a narcissist. He can't help it.)
Posted by Vixen Strangely at 1:06 AM