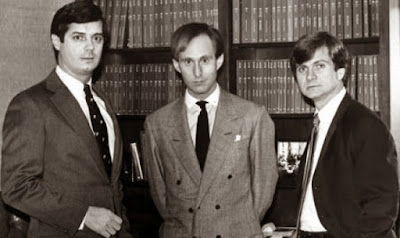 The above picture has Paul Manafort and Lee Atwater in one convenient place--as they should be. See, Paul Manafort and Lee Atwater are kind of the progenitors of this little old thing called the Southern Strategy which is basically a dogwhistle racism that relies on racists to understand an encoded message about who is to blame for all the bullshit going on, whilst also wanting to protect the unbearable whiteness of privilege. Roger Stone--well, we can pretend he isn't part of this campaign because of who he is. But he assuredly is a mouthpiece for this campaign.

These deep connections to the roots of the latter-half of the 20th century Republican politics are enough for me to recognize the "questionnaire" idea that Trump laid out as a kind of extremely unprescient McCarthyism. Is it not possible that respondents could lie?  Is it not a kind of "political correctness" to try and determine who has "right thinking"?

Heh. Why try to trap what Donald Trump and his campaign does by comparing it to anything the GOP ever tried before? Except because he is coughing up an unsavory past and because he is sort of wrecking the GOP's credibility. His words don't stand up to the least fact checking.

Great picture find Vixen. Since Nixon it's been apparent there is no such thing as Republican values except one; Winning.

The red flags, associations, clear signs of domestic abuse, bigoted statements, financial disasters, and lack of actual accomplishments should have disqualified Trump a year ago but, the Republican Party is wedded to winning no matter what.

A functioning media would be able to call this out at this point but, because they've been cowed by decades of right-wing whinning they continue with the Both Sides mantra and not a dime's worth of difference bs.

Hi Vixen, one of the things that mildly interests me about Lee Atwater is that when he discovered he was dying he went around and asked for forgiveness from people he had attacked politically. In my mind this ultimately makes him a much more decent human being than most political activists. I've seen a lot of people sling a lot of mud, but I don't recall ever hearing anyone else apologize, let alone ask for forgiveness. Political activism usually winds up doing more damage than it helps. You remember the old saw about the road to hell being paved with good intentions.

I completely disagree that Republicans are de facto racists. I feel this is simply a convenient social construct used by political parties to defame groups that oppose them. Where I live one rarely comes across a Democrat, and honestly, Vixen, I can sincerely state that I don't think I know one person who is a racist. Now there is little tolerance for rioters or people like those in Milwaukee who want to beat up white people simply because they're white. But that is about antagonism to violence and destruction. Where I live white and black people get along very well.

I also entirely disagree with the idea of white privilege. I can understand that families who enjoy inherited wealth could be privileged. And I understand people whose social position automatically allows them in the Ivy League schools as having privilege. However, I have to say that the milieu that I grew up in and live in today are not people who have enjoyed that elitism. I think the people in the US enjoy civilian privilege. IE, many of us like your father and I, went down and joined and swore on the foursquare to protest America against all enemies, foreign and domestic. And we have done that thru the generations. The civilians who have not served have enjoyed the privilege that they received when we put our lives on the line for them.

I can understand frustrations creating various kinds of indignant expressions. However I believe many of these views are ultimately incorrect.

I don't think I know one person who is a racist.

Reminds me of the time I was on the internet for 20 years and never met a troll.

Vivacious! I didn't say I had never known a racist. I said I don't know any today. And I don't.

My God, V, I grew up in the segregated South and have seen more genuine racists than there are stars. In my early years half of my family was as racist as you can imagine.

You talk about dog whistles – this evokes an image of something so subtle that the recipient has to be tuned in at a certain wavelength to even register what it is. It's so subtle, it's almost undetectable.

When I was a kid, it was detectable. I'm not talking about “dog whistle.” I'm talking about megaphone. I'm talking about out and out, demonstrable cruelty, both psychological and physical. If some of these people today complaining about racism were to be dropped into my childhood era, they would think they had been relegated to the pits of Hell. And frankly, most of the racists were Democrats.

Today in 2016 the sentiments have changed all over the place, and frankly they have changed in both political parties.

That statement just stood out at me because I knew better--but literally just had the experience of one of my co-workers (a very patient and professional woman)getting told by a customer "That's just how you black people work, isn't it?"--implying she wasn't helping him enough because of some inherent flaw. Maybe because I work frontline with the public, I've seen people pretty much at their worst--when your shingle literally says "I'm from the government and I'm here to help you", people are prepared to confront you with a little skepticism. But I do notice my POC co-workers have challenges from how they have to deal with some of the public--in our phone center, for example, I feel a tinge of sympathy for Indian-American co-workers with a trace of an accent--their callers treat'em like they are some outsourced help.

It is a bit true that a lot of social justice focuses on microaggressions--turns of phrase and ways of relating that are selectively or contexturally off-putting, that just don't seem like a big deal to most white people. I'm not going to front that I'm speaking for woke whiteyhood, but when people say something hurts them or bothers them, I just listen because I translate "real to that person" as just being "real". Maybe because I've experience sexism I recognize that specific experiences might not be relatable for people who don't share that experience, but just exist, and create situations where you cope with a problem that isn't your fault but is a problem anyway. Like the guy who once dismissed what I had to tell him with "I want to speak to the head man in charge." Because what does a gal know about accounting and math? (Inwardly, this was sort of hilarious because there are a lot of women drawn to civil service and customer service--he'd have had to go four titles above mine to get to a "man in charge". Ladies with calculators, all the way!)

But the BLM issues of police-involved black homicide, or brutality, or treatment in prison-aren't on the micro-level, nor are issues like voter ID laws when they are specifically targeted towards minority populations. The thing it, I relate to those issues as fundamental civil rights and human rights issues because they shouldn't be happening to anybody regardless of race. It bothers me that disabled people and queer people also have unfavorable outcomes with law enforcement. It bothers me that if local governments have a way to deny the availability of the ballot to anyone on racial grounds, they will find ways of otherwise demographically targeting denials. And while there isn't lynching in quite the old way--take the example of Sikhs and Arab-Americans now experiencing hate crimes, even executions--the hate takes different forms, but ignorance and prejudice always needs to be countered.

I will say on behalf of white privilege, it's subtle, but even as a working class white girl, I noticed I could get away with what a black girl could not by batting my blue eyes. I unfriended a foolish young blonde child on Facebook who shared the idea that if you just behave yourself during a traffic stop, all will be well. Yes, she can! But my black friends know this isn't always the case--for *them*, and I have listened.

I will say on behalf of white privilege, it's subtle, but even as a working class white girl, I noticed I could get away with what a black girl could not by batting my blue eyes. I unfriended a foolish young blonde child on Facebook who shared the idea that if you just behave yourself during a traffic stop, all will be well. Yes, she can! But my black friends know this isn't always the case--for *them*, and I have listened.

I will say, though, re: activism and BLM demonstration/half-a-riot situations: the social justice terminology we use is "respectability politics". It is not fair that the optics are weighted against protesters, and that any tactic, appearance, failure of leaders to be perfect, counts against the message. But unfairness is the reality. MLK knew that riots are the language of the unheard--but the sad thing is, they are also the visual image of people that won't get through to the audience they kind of need to convince. In some ways, they are playing into expectations, and that isn't helpful--but it isn't my place to tell people how to run their movement. It's just how I observe how it is being received.

One of my first words as a baby was the n-word-but the people who taught it to me, some of them, voted for Obama. I believe in change.