Literally the Founder (and MVP) of ISIS 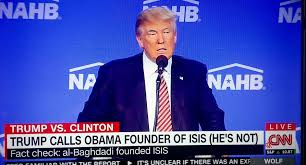 There isn't a lot of surprise for me in Donald Trump's oft-repeated claim of late that President Obama is the founder of ISIS. Donald Trump says inflammatory things, things that are based on conspiracy theories, and his dislike of Obama is pretty well understood. What is a little less fathomable is his intent to go with the claim as being literally true. For example, when Fox News' Hugh Hewitt tried to help articulate his comments as being a strong opinion, Trump corrected him, reiterating that he believed it to be a fact.

There is quite a lot wrong with what Mr. Trump alleges to be facts in this case. While some trace the foundation of ISIS to Abu Bakr al-Baghdadi, and others would push the genesis of ISIS further back to AQI led by Abu Musab Zarqawi, the existence of a group, sort of fashioned from a rib of al-Qaeda, existed in Iraq before President Obama ever took office or appointed Sen. Clinton his Secretary of State. The claim that AQI was completely quiescent in 2008 is not really true, although it is true that they had a heck of a comeback with the Syrian civil conflict and the basically anti-Sunni government of Nouri al Maliki.

There might have been changes to the course that Obama's foreign policy took with respects to the region that might have made a difference--but there are no guarantees. Despite the conditions of the 2011 SOFA agreed to by his predecessor, Obama wanted retention of 5000 "advisors." This was a no-go with the Iraqis, but there's no sure way to know what 5K in support personnel could do, anyway. Covering the deteriorating conditions in Syria, it's very hard to say what, if any course, would have been preferable in stopping ISIS, when ISIS was among the many rebel groups against Assad--and the Assad regime is pretty much a pack of bounders who ought to be stopped as well. And as events evolved, it became clear that ISIS acted in a way that predated not merely on Assad's military but civilian and other rebel groups as well.

And yet (and I will spare these worthies' reps by not linking) some commenters even speculated that ISIS was less dangerous than the growing Iranian influence. Huh. (PNAC folks seem to have had a domino theory plan re: the Middle East that never took proper stock of the relationship with Iran and Syria, or indeed, ever seemed to grasp the nature of sectarianism. There is no profitable fucking with it. Iran does need to have another revolution to update the relationship of Shia theocracy to the government as a whole--it doesn't need our help or hindrance, thanks, much.)

But what is appalling is that Trump is delivering post-facto criticism, whilst alleging that he had actually been right about all matters ISIS-related from the beginning. He alleges he was against the Iraq invasion--well, no.  His strongest argument that Obama aided ISIS is the claim that he followed the status of forces agreement signed by Bush, but Trump seems to have been for a more rapid and complete withdrawal than Obama himself.  He references the Libyan intervention as assisting ISIS, but conveniently forgets he was for that, too. (Which also means forgetting the reasons it came about as well, Gaddafi was slaughtering the people in Benghazi--and yes, this was a NATO op.) He was never on the right side of any part of this foreign policy and is not now and will not be, because he doesn't know how any of these things work.

Even more ludicrously--how is Obama an MVP of ISIS if the Administration has been leading airstrikes against them for two years, destroying thousands of ISIS fighters? I would say killing thousands of ur dudez is a pretty big own-goal, no?

He may be positive that he's correct on this extraordinary lie, because he needs to craft the appearance of Democratic presidential administrations as being treasonous to cast doubt that they can accomplish the shit that so obviously needs to be done.  But in order to believe it--he has to ignore history and current events and create a weird false history that can not possibly aid him in fixing any of this, because he hasn't any particular skills or insight into the matter.

He's raving, in other words. But this kind of utter contempt for facts or reality simply can not help him enact any policies of him own. It may be popular with a subsection of people who enjoy slamming Dems for everything--but I do not understand how it would resonate with anyone who knows better and understands that pettiness and slander are not the basis for a constructive vision of how to be the leader of the fucking free world. And none of that importance is served by parroting the sort of US foreign policy criticism that might as well fall out of the mouth of Big Bad Mad Vlad himself.

There was a time when most conservatives would have understood the problem with what he's doing here, too. I hope this is still true.
Posted by Vixen Strangely at 12:23 AM