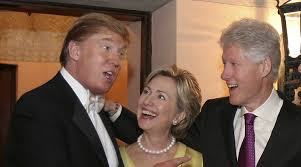 You know, there is something extraordinary about "Seddique Mateen sits behind Hillary Clinton" and "Trump talks about Seddique Mateen while Mark Foley sits behind him" which simply borders on the pathological.  The actually "story" would sound pretty much like "private citizen attends public event, news at eleven", except the "news at eleven" part isn't even really necessary. Is there some particular fact-based reason that Hillary Clinton would be a jihadi sympathizer in the real world where the humans live?

And as for Mark Foley's support--does that mean Trump is pro-creep? Are we actually giving credence to the idea that the only charitable contributions anyone has been able to find for Mr. Trump are for NAMBLA?  (Check it--we might have associations pointing to opposite-sex hebephilia, but any rumors regarding anything else are obviously without ground. I am a responsible muckraker, I am!)  Pshaw! Who in the world is such a credulous fuckwit as to base where they stand politically on stuff they just randomly "hear"?

Look folks, August is going to be a very long month if every stupid thing that "might" be a thing is treated with slavering excitement. Both appearances mean very little. It would be neat if regular political journos didn't go all National Enquirer, hm? (Which Trump says is a great newspaper, deserves a Pulitzer, the best...)

"Clinton allows private citizen of dubious reputation to attend open rally" is not a newsworthy story.

"Trump criticizes Clinton for allowing private citizen of dubious reputation to attend open rally because she must have known who he was" may be a newsworthy story (not favorable to Trump).

"Trump criticizes Clinton for allowing private citizen of dubious reputation to attend open rally because she must have known who he was, while Trump's close friend and invited guest, a sexual predator, sits on the platform" is definitely a newsworthy story.