Trump's Shutdown is Off the Wall 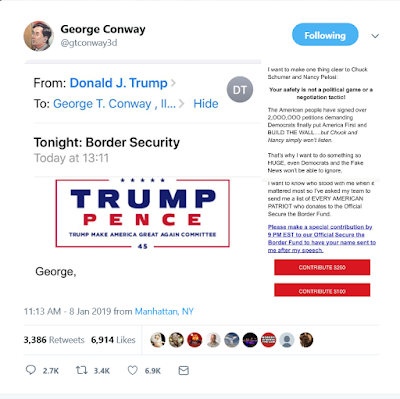 George Conway shared a very special message he received from Trump (well, the Trump 2020 campaign, right?) that is very informatively fundraising off of the wall promise. Trump informs his pigeons that this is not a political game. We are more generally informed that it is, nonetheless, very political. Because he expects his campaign to make bank on it.

So, just based on the shutdown of last three weeks, and the speech Trump gave which did not declare an emergency, and the fundraising, what should we gather about Trump's strategy, here? He's made pains to describe his wall as a "barrier" and seems to think that building it from steel rather than concrete makes a serious difference, but that sort of sounds to me like a real estate developer trying to win over investors in a project. And that's weird, because his campaign was practically built around "Build the wall!" Yet, it began as just a gimmick.

Shouldn't he have had some ideas about what kind of wall he wanted before now? For that matter, during the first two years of his presidency, shouldn't he have built more of the wall than zero (0) additional miles by now?

Despite some handwringing about the net effect of Trump being able to broadcast more lies to the American people, I'm not sure that anything very effective was accomplished by his Oval Office speech. Unlike at his campaign rallies, this setting has him stiff and scripted, more prone to sniffing and seeming uninterested in the content. The result actually is that even Fox News is fact-checking him. What he has said is basically misinformation that has been repeatedly debunked before, but more to the point, he appealed to Congress to end the shutdown because he feels he politically can't (and other members of his party understand this as well.)

Still, despite all that his been personally invested by Trump in this shutdown over wall funding, it seems like he's handed his political future to Democrats just after having a very rough midterm election. And he privately, per NYT, acknowledges that the speech and visiting the border are unlikely to change anything. He left it to Senator Schumer and Speaker Pelosi to contrast his untruthful statements about border security with the real problems caused by the shutdown.

If he had given himself any room on this, he could have magnanimously agreed to end the shutdown, and promised to work out the wall/barrier/fence funding later, talking up how he was ending the "real" crisis of badly divided government. But he hasn't given himself that room, almost entirely casting it as a loss if he doesn't get his way. He continues to own this shutdown, and sill has not gotten a wall. 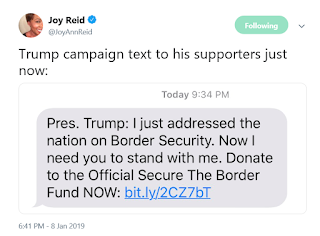