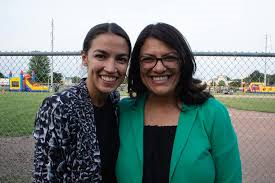 Newly-sworn congressional freshmen Rashida Tlaib and Alexandria Ocasio-Cortez have already  caused a little concern amongst those of the concerned-person class with some gasp! genuine thoughts about the tasks the new Congress should see to. I'm not especially concerned, myself--I appreciate seeing them dive into their new positions with enthusiasm.

The most "tsk-ed" about was Rep. Tlaib's comment about what her entrée into the House of Representatives meant to her (and her constituents, and her young son):

Among them has been the Michigan congresswoman Rashida Tlaib, who had some strong words for the president. Speaking at an event shortly after being sworn in, Tlaib, the first Palestinian American elected to Congress, recalled a conversation she had after she won.


She said: “And when your son looks at you and says, ‘Mama, look, you won. Bullies don’t win,’ and I said, ‘Baby, they don’t’ – because we’re gonna go in there and we’re going to impeach the motherfucker.”


Tlaib had been clear about her intentions in impeaching Trump throughout her campaign. She tweeted in March: “Why am I running? Because this is about electing the jury to impeach (POTUS) and I will make a heck of juror.”

One might say her language was indecorous. But that's the only complaint I guess I understand. I don't think her choice of the word "motherfucker" is anywhere near so troubling as the President's continued condition of being one. Her expression of desire to impeach the president had been a subject both of her campaign and one she has explained quite well in a published opinion piece. The position of impeaching this particular president isn't a purely political one--if the issue is looking for reasons to impeach him, I would say we are actually spoiled for choice. It would probably be more apt to say that the determination with which Trump has been defended despite his various transgressions by members of the GOP is a political decision on their part which merely looks cynical now, and could prove disastrous for them later. The saying of this truthful thing though, was treated by some persons on both sides of the aisle as a bit of a blasphemy.

I'm pretty much unbothered by either her scatology or ideology here. I am more worried by the erosion of norms that Trump's behaviors have manifestly resulted in, than the clear, unpretentious language, used by the incoming representative.

In another mini-furor, Rep. Alexandria Ocasio-Cortez caused some consternation by….dancing? Ha! Ok, well, that, too, but she also made a suggestion that the millionaires and billionaires could stand to pay a higher marginal tax rate of about 60-70% to actually fund our government properly.  This would be in line with previous historical tax rates, and can actually be backed up with solid economic figurin'.

Oh, the heresy! Of course, Grover Norquist is continuing to live out his early childhood training by being intentionally obtuse and intellectually dishonest:

As if he is not educated enough to know what a marginal tax rate is, or has not the wit to know that government is neither ownership of its citizens, or free of charge. Cops, firefighters, soldiers, their tools of the trade, the very buildings and maintenance staff that surround our elected officials--need to be paid for. It is folly not to consider this--a folly highlighted by the privations that occur during even a partial government shutdown when some things, like the salaries of actual people, are not paid for. Taxation in this country is determined by congressional members like Ms. Ocasio-Cortez and she was voted in by her constituents--that good old "representation without taxation" our founding fathers railed against is hardly happening here. It's a reasonable topic for her to discuss aloud, in much the same degree to which a privileged white dude like Grover Norquist should step really far away from comparing anything to slavery that is not actually slavery. Maybe Republicans have to pretend Norquist's economic notions aren't bugshit crazy, but Democratic Socialists most certainly do not.

These shibboleths, these household idols, that are being supposedly profaned, though, don't strike me as being quite the profanity that President Trump is engaging in with his shutdown, which he owns because he has no takers for this highly toxic property of his own building, over a dumb, ineffective wall that he believes he needs to satisfy his little racist fan club.  His rhetoric has never had a good foundation with respects to this wall funding--Mexico was going to pay for it, but maybe not. Maybe they will pay for it with tariffs (that are not raised under the tax deal he was so excited about). Maybe he will declare a national emergency and eminent domain all the property he wants for his maybe concrete, possibly steel, definitely slats, kinda see-through, ever changing wall (and watch the many lawsuits roll in, because none of that shit is legal and so many Americans would have standing it is not funny).

In the meanwhile, federal government employees are suffering because they are not getting paid, and they either really would work if they could, or are being made to work without pay (huh--you know Grover Norquist might be able to think of a word for that thing) when they still have bills and child care and so on to deal with.  Historically, fed workers have gotten back pay from shutdowns, but it isn't a guarantee, and there is no good outcome for contract workers.

But Trump, because he is either appallingly stupid or deeply dishonest, or the rarest combination of both ever to be witnessed, is profanely certain that he wants to think of these workers as both on his side (why would they be, though?) and "on strike".  (He also thinks he's too popular to be impeached, but Bill Clinton was way more popular and was impeached, so--yeah. Trump's a fucking moron.) And it has been suggested Trump wouldn't mind a shutdown lasting months or years to get his stupid racist monument that appeals to only his racist fan club, that satisfies his stupid 2016 campaign promises, that he is desperate to appeal to because he hasn't much else and would very much like to be reelected because he thinks it saves him from indictment.

Ocasio-Cortez and Tlaib's transgressions aren't a damn freckle compared to the vast tumor of Trump's malignancy. And I would very much like to see his nonsense cut out entirely.

And I am also extraordinarily pleased that new heresies, like a congressional hearing on "Medicare for all" that we might not have seen as functional before just now, can replace Paul Ryan's keg stand dreams of Medicaid cuts.

I don't love this president. But I love the curses and heresies of these women to conjure with: Nancy Pelosi, Rashida Tlaib, Alexandria Ocasio-Cortez, and Pramila Jayapal, so much, my heart swells. Their worst day is 100 times better than Trump's best.

UPDATE: And I will put this screencap from Twitter here:

Because that is not consistent, but it is fascinating.

Posted by Vixen Strangely at 1:37 AM