EXCLUSIVE: DHS test of steel prototype for border wall, Trump's preference, showed it could be sawed through.

You can see where all of this has been very carefully thought out by the Trump Administration because they are super geniuses.

Also, Trump says he did not either have a tantrum: 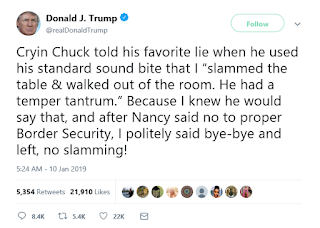 Because he knew "Cryin Chuck" would say that!  And after he brought candy, too!

Posted by Vixen Strangely at 8:42 AM

I haven't been keeping up with this as much as, well, everybody else is, but I did see the President on television this morning saying that the Democrats wanted steel even though it cost more. So I'm certain that this new information about the problems with steel slats will be laid at their door.

See, this is the problem. He's so stupid he's making all the rest of us stupid.

Of COURSE you can cut through steel, or anything else you make a fence out of. We've always known that - it's not exactly a scientific breakthrough - but because of trump we breathlessly report it as a great big AHA@! moment.

We've been stupid. There are whole webpages based on whether or not fire can melt steel beams. Sometimes a clue by four is needed to beat sense into the rhetoric.

Those were cut with a torch. Requires a couple of steel tanks of oxygen and acetylene and some hoses, all of which can be mounted on wheeled cart weighing in at about three hundred pounds. Take about fifteen minutes each. There are indeed diamond bladed saws that will cut through steel and concrete quicker, but require two men, a donkey and a generator.

Given what we're up against, this is pretty weak tea.