TWGB: Messages in Many Bottles

“This wasn’t just one email or call, or one this or that. Over 100 contacts is really significant because you don’t just have 100 contacts with a foreign power if there’s nothing going on there,” said research analyst Talia Dessel. https://t.co/LCr1vJnQ4F
— HuffPost (@HuffPost) January 10, 2019


At some point, the brain protests being introduced to the sheer number of players involved in l'affaire Russe (as this thing is tagged at Lawfare). Several persons in the campaign and later, the Trump Administration, attempted to put forward the astonishing claim that there were no ties with Russia for the Trump Organization, for Jeff Sessions, and on and on, and it now really seems like there were so many contacts with Russia it is deeply suspicious, and also Putin-friendly Ukrainians, because, well, you can't forget those (I mean, unless you are trying to keep them a secret then you might pretend you have....)

It's getting hard to keep everyone straight.

There is also a lot of reading between the lines, or, in some cases, just copying and pasting blacked out lines to find that they actually reveal some surprising stuff--as happened when the lawyers of Paul Manafort sort of had a technology-fail and inadvertently revealed that prosecutors understood that Manafort slipped 2016 polling data to his associate Konstantin Kilimnik to kick it up to someone else for some odd reason. Due to a case of mistaken identity, the NYT ran with the assumption this was Oleg Deripaska, which is reasonable because Manafort owed Deripaska a shit-ton of money and used Kilimnik as a go-between, but actually, it was two Ukrainian  oligarchs.

Serhiy Lyovochkin and Rinat Akhmetov were actually long-time backers of Manafort's efforts to keep Putin's thug Yanukovych in power. So, you know. There's really just a lot of foreign gents who had some leverage on Manafort. So instead of Oleg Deripaska (who was sanctioned by the US, and had those sanctions precipitously dropped by the Trump Administration, a scenario that AHEM! is still poorly answered), we have these guys who backed Manafort's Ukrainian business on behalf of Putin, who now for some reason have an interest in Trump's campaign (on behalf of Putin? Da! or Duh!) So, what did they want with this data, and what did they plan to do with it? (Pollsters who have been in contact with Mueller might have the details on this.)

Funny one should ask! (Okay, that question was mine.) Near as I can figure, and as far as I think Mueller has figured, it's something to do with what Putin and them have always been doing, Pinky--taking over the world! 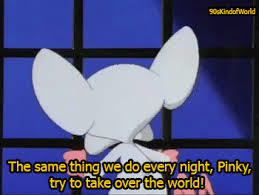 I mean, winning friends and influencing people, just like good old Dale Carnegie said. The way Manafort and company's Ukraine tactics involved influencing the west via the media in ways that talked up Russia and denigrated then Secretary of State Hillary Clinton.  This shouldn't be a surprise, because Russia has been using PR all over the place for a while. I can point to Fox News openly admiring Big Bad Mad Vlad and his manly resolve back in 2014--isn't that funny?

Not when it looks like foreign interests have good and infiltrated our country's elections it doesn't. Which leads me to another really interesting thing--remember Natalya Veselnitskaya, who met with Don Jr. in the infamous Trump Tower meeting that included Jared Kushner, Paul Manafort, and several Russians, and was supposedly about adoptions (which entirely meant Magnitsky Act sanctions)? Well, in a case involving Prevezon Holdings, she was found out to be working very closely with the Russian prosecutor's office. Which backs up the Don Jr. email that indicated that Veselnitskaya was from the Russian government and here to help the Trump campaign. The "adoptions" thing was always about ending the sanctions.

And sometimes, even broadly hinted at favors are a little bit rewarded.

And don't even get me started on the Ukrainian/Russian inaugural funding thing, because again, so many names, so much influence, so much grift exceeding beyond the wildest dreams of most cons ever, and too showingly and fed-alarmingly so.

Messages between the Trump people and Russia were obviously sent. Now that so many messages have been prised out of their bottles, and shown to us regular folks, how are we apt to feel about it?