TWGB: She's a Real Pistol and He's a Son of a Gun 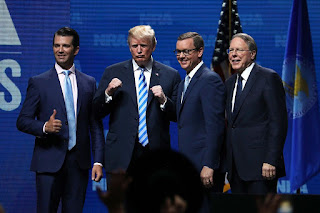 The new pleading from Maria Butina in the Trump/Russia, changing her admission of guilt from "not guilty" to "guilty", with the potential of a cooperation agreement, is apt to be down-played and misunderstood, and I definitely understand why. Butina was apparently very good at making friends and influencing people and a catalog of Google images with her and numerous different people in the Republican milieu  is uncomfortable extensive....to conservatives. Among people she has met with--Scott Walker, Bobby Jindal. Meh. Donald Trump, Jr.

Wait a minute. Donald Trump, Jr.? It sort of seems that Maria Butina's status as an agent of Russia falls somewhere between Anna Chapman (who her handler indicates she may have "upstaged") and Natalya Veselnitskaya. I don't think it's far-fetched to consider her status as "spy"--she apparently successfully and intentionally infiltrated a known very conservative-oriented social political group with the intent of coming into the orbit of prominent political figures. Making kissy-faces at NRA politics has been a big part of the Republican party for yonks. 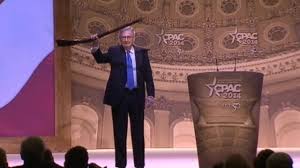 And of course, people meet people and have all kinds of interesting international contacts all the time. But there is reason to believe Russian money got funneled through the NRA to the Republican party, and that the NRA illegally coordinated with the Trump campaign. A very worrisome thing is that the first introduction we have to Maria Butina regarding the 2016 GOP race is in 2015.   Meaning Russia already, before the primary had taken off in earnest, had an interest in Trump (which could have developed in 2013, or 2011, or thirty years ago--this is how far back Trump has had Russian involvement in his affairs).

And yet, Trump wants to allege that somehow, the connections are only being drawn to himself and Russia because he won the 2016 election. Not even close. The timeline on the investigation into the DNC hack started well before Trump ever won. But in the meanwhile, at least 16 Trump associates have been found to have been contacted by Russia, which is more than the "zero" he once claimed, and certainly his very own family's contacts should have been known to him. Not in the least because his family and immediate associates are a terribly chatty lot.

I mean, is it even coincidental that potential front-running AG pick, William Barr, who has written such favorable things about Trump's defense and delusions was previously contacted by Trump prior to his pick for AG as a possible attorney for Trump's defense? (Which would be a very good reason, were he to take the job as AG, to promise to recuse, that sort of thing being very ethically troubling. But I think he's a throwback nutter in several ways, so who knows what he'd do?)

In the also "funny, but that likely merits a recusal" vein, Jared Kushner (last seen bucking up Prince MbS from the "just killed a guy and got caught" doldrums) had met with acting AG Matt "Hot Tub Time Machine Bigfoot DNA Big Dick Toilets" Whitaker, and presumably sipped tea and didn't mention at all the shit he was liable to be indicted for. Because why would that even come up. right?

And this is why people like Nick "Silver Spoons looking got $50 million from consulting and shit MF" Ayers does not even want to be WH COS, even if that would be a really cherry thing to put on the old resume in one's mid-thirties. But the job is poison, now. Being a Trump-wrangler is not worth it, even with hazard pay. Even Mark Meadows has too much sense (as of last I checked).

I have said it before, but it stays current: This looks bad because it is bad. The Trump Administration has to throw lies after other lies are proved to be wrong, because the truth is not good. Other members of the GOP defend this for reason I can not fathom at this point, unless there is also leverage against them (real or imagined).

But the overall picture: not good. And among the potential casualties, the NRA now wonders if they are not able to survive, and are cutting things like NRATV "talent".