This Comey Transcript is Something 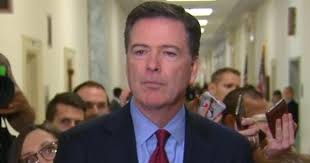 So, I've been reading this thing, and I'm a little weirded out, because it kind of looks like House Republicans are trying to legitimize idiotic stuff Tweeted out by President Trump.  They are asking him about private messages between Peter Strzok and Lisa Page that he wouldn't have been privy to during 2016, and trying to get him to admit political bias made its way into their work product against Trump when I'm pretty sure that doesn't match either what publicly was released from FBI or what they could expect to get from Comey himself (which might have been a part of why they did not want this questioning made public).

This definitely makes me wonder: was there some quiet, secret, desperate hope amongst Republicans that Hillary Clinton would have won in 2016, so that they could endlessly litigate what she had done (thus and so) over Benghazi and emails and any other little thing, and never actually shoulder the mantle of governance? Because this transcript reads like the forlorn hope that Hillary Clinton would become relevant again so they could get another bite. But all they have is Jim Comey, and his Boy Scoutish but dry-humored implications that they are not only not barking up the wrong tree, but that he is not, in fact, a tree at all, but a very tall human who was simply trying to do his job.

In other news, they do, in fact, have Donald Trump as president, who Tweets things like this: 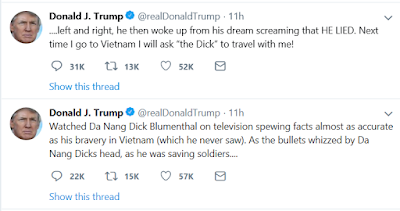 which must truly be a very great comfort to them. But it doesn't necessarily obscure the rather difficult reality that Trump lies and probably has materially obstructed justice rather a lot, right in front of us, and it is not the FBI's fault if they noticed it.

Also, Trump probably posts awful Tweets like the above, not because he is barking mad (although he might be) but to try and change the news cycle from a bad thing happening to him (because he is incompetent) to a bad thing he said (because he is a very bad boy, please love his badness). He also is using the John Kelly resignation announcement as the same kind of deflection, for the great number of people who don't speak knuckle-dragger. But the subtext is that the guy who sometimes facepalmed moments of utter Trump depravity will be banished, so let's bring on someone who is more of a Scaramouche.

We don't know who this person will be, but rest-assured, they will be awful, and should not ever, ever, be intro'd as a signal of a Trump pivot. This dude doesn't pivot. He just spirals, wildly, always, flailing, like a tantrum-y toddler, and maybe takes a big enough dosage of adulting to sit through a funeral, a little bit. But it will not ever last.

And GOP needs to stop fronting for his dumb ass.
Posted by Vixen Strangely at 1:14 AM

I have little doubt that, had Hillary Clinton won, there would have been endless hearings and investigations. It's sort of a Clinton thing.

It's actually a modern Presidency thing, but one for which Obama was somehow mercifully bereft.

You bring up a point here that I don't believe people make near enough of: The Republicans act like not only did they WANT Clinton to win, but that she actually won and they're still campaigning against her. I've actually heard Hannity say, "All this criticism of President Trump, but where is the criticism of Clinton?"

Poorest winners ever. Maybe it's because the President is touchy about his "landslide."