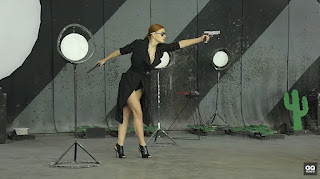 Even though I'm just a normal person who waits with bated breath for things like surprise indictments of peripheral Trump/Russia figures or who refreshes Twitter threads about secretive federal Grand Jury hearings like a twitchy addicted lab animal looking for a fix (especially on Fridays), I'm also kind of relieved that Saturday was relatively quiet on the news front, so I could finally catch up with some of the hanging news out there. There are times when taking in Trump World news is a little like trying to drink from a fire hose.

On Thursday, Maria Butina plead guilty to engaging in a conspiracy to infiltrate the political sphere of a certain political party with the goal of influencing US/Russia relations as a foreign agent working in hand with Russian billionaire Alexander Torshin. Some people might quibble over whether political folks who met her through the NRA should have been a little suspicious over whether she was just a little...obvious or whether being an agent of Russia or a spy are different things, but I think The Daily Beast article includes a pretty valuable perspective:

John McLaughlin, former deputy director and acting director of the CIA, described Butina as an example of Russian “espionage lite,” operating openly but hiding the direction and support she got from the Russian government.

Steve Hall, a former CIA chief of Russian operations, said Thursday, "It's my theory that Butina is not actually a staff officer of any Russian intelligence service. She is somebody who has been co-opted by somebody else in the Russian government to do a job."

So maybe not a spy like a "secret agent"--but some kind of agent, anyway.  I kind of suspect her gun rights org was a cut-out but what do I know? But did US people think this back when she was making friends and influencing people--and did they care?  Eh, details!

In other news, we got a further corroboration of the activities of Individual One with respects to Michael Cohen's activities: Donald Trump was in the room with Cohen and AMI's David Pecker when they discussed what to do about Trump's long and winding road vis a vis horndoggery--in August 2015. So the idea that Trump would be making arrangements regarding the silencing of troublesome wenches was not a spur of the moment post TMZ video thing; it was known to Trump that this would be a problem (how big, though--a real quote from Steve Bannon in Wolff's Fire and Fury suggested Trump's other attorney, Marc Kasowitz, handled maybe "a hundred"). It was a part of Trump's entire campaign strategy to minimize a seedy existence (which may entail snorting Adderall and sleazing on underage beauty contestants--stuff which was known about, but never really addressed, by MSM during 2016 when it might have mattered--thanks!) But eh, details!

It also turns out that Paul Manafort, of the maybe kinda/sort of JDA with the Trump defense even since his plea deal and the being too close to Russia to stay on as campaign manager in 2016, but who still shaped the Trump transition, also gave Trump advice about how to discredit the lawful investigation of his activities by the FBI. Who would have thought? But there was so much suggestion of obstructing justice and lying to create a bad opinion about the FBI's work. And it really seems in retrospect like this is what Trump did--with a will! Take the regular snipes against McCabe (who offended Trump I guess because of the opening of an obstruction of justice investigation that was totally well-deserved?) and the low-hanging fruit of the Strzok/Page relationship, which, while interesting, never resulted in any leaks from their Clinton investigation or from their general distaste for Trump, and never actually resulted in any out of the way cover-up by the FBI of their texts. Some RW pundits are maintaining that the standard resetting of returned electronic devices to factory specs (as is procedural) was somehow a "wiping" (great shades of the "acid-washing" of Hillary Clinton's emails!) of damaging material--but no. Information was recovered because that is how data retention works. But eh, details!

Another thing Trump has tried to discredit has been the Steele Dossier, because it sort of loogied into the start of his presidential term and made all his shit extra-difficult, right? The funny old thing is, despite his efforts to discredit it, some of it has been corroborated, but none of it specifically has been debunked. And Trump never should have been blindsided by it, because he was briefed on the contents by Jim Comey. He might not have been told that it was funded either originally as GOP primary oppo or that it was then acquired by Democrats, but regardless--it's a raw intelligence document, meaning it just faithfully recounts what people have informed the investigator of, without necessarily meaning that the details were corroborated. For people hoping there is a pee tape out there, I think they may be out of luck--but since Trump is a known sex beast everywhere he goes--there's probably something gross to look out for. Details, eh?

Another weird detail being looked into of late is Trump's inauguration fund-raising and how much got paid into the Trump Organization's very own pockets. We knew as of last year that the inaugural fund was badly managed and a bit dodgy. But the interesting thing is how much might have been funneled in from foreign sources, and then paid out to Trump properties. I mean, we know foreign interests already have decided to invest with Trump-labelled properties: see for example, the Saudi government booking 500 nights worth of rooms at Trump International Hotel? I've said myself that one can hardly have a blind portfolio if one's name is in big lights about one's actual holdings, at that can surely not be missed by people hoping to use money to curry favor. (And of course US taxpayers are giving Trump properties revenues as well. Ah--details!)

Which brings us round to the next stage of Mueller's investigation, because what is at stake (financially, etc.) for Trump is very much part and parcel of why is chooses to obstruct what he does, discredit what he does, champion what he does. Mueller is looking at the Middle Eastern end of influences on Trump. This very likely connects with things like those 500 nights worth of rooms booked by KSA, and maybe also Trump's continuing denial of doing anything about the hit on Jamal Khashoggi by Prince MbS. One could definitely be persuaded that Trump's interest there is all about money.  And this ridiculously gets us back to old Mike Flynn, who, among the weird deals he was making, included an plot to join with Russia to build nuclear plants in Saudi Arabia and other places in the Middle East like UAE and I don't know where else.  Of course, sanctions would have to be lifted on Russia, and you couldn't then go and place any on KSA, even if they do, sometimes, sanction terrorism or state murder. Important details, yes?

(Thinking about this might place Trump's opposition to the Iran deal in some perspective--it isn't that he cares about who gets nuclear capability or even pallets of cash. He just figures KSA is more profitable. Or so one might take away--I'm not saying this is the only consideration.)

As to Flynn, the absurd lament of his sentencing memorandum, which I addressed as being nonsensically taken at face-value by pundits on the right, was taken down in the same vein by a reply from Team Mueller, which encapsulated that Flynn had been lying, continued lying to the FBI, was recognized as lying after being fact checked, got fact checked to his face and then stayed lying, and only corrected himself upon recognition of serious legal jeopardy, and of course, was a grown man with a job that entailed his certain knowledge that one does not lie to law enforcement in the first place.  And I suppose pundits might continue to deny these details, but they have been refuted in a court document now for the benefit of actors in good faith.

Which I'm not saying that all right wing pundits necessarily are not good faith actors--but, eh! Details!
Posted by Vixen Strangely at 1:12 AM

Seems like an awful lot of action, considering what I hear from the right.