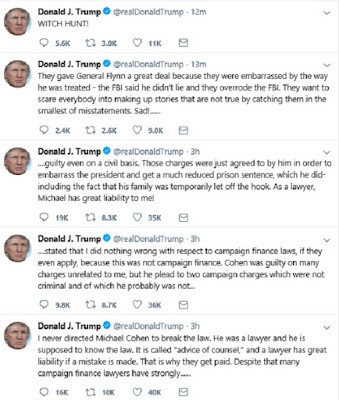 Trump refers to this thing called "advice of counsel" but I am reasonably sure this thing does not mean what he thinks it does. This Tweet boomlet is basically here courtesy of "things no lawyer would tell you to Tweet about like this, ever".

UPDATE:  Trump being Trump, he proves that he doesn't entirely get the "advice of counsel" thing pretty much at once during a pretty sympathetic sort of "If you were a tree, would you be the type of tree that leaves?" interview--here's the fun part, via Splinter:

“I never directed him to do anything wrong,” Trump insisted, claiming instead that Cohen:

A) Should have known that he was breaking the law because he’s an attorney;

B) Didn’t actually work for Trump as a lawyer, so much as a low-level PR guy;

C) Only pled guilty to make the president look bad in the first place.

“What [Cohen] did was all unrelated to me except for the two campaign finance charges that are not criminal and shouldn’t have been on there,” Trump claimed, at times waving printed-out articles he said exonerated him from any wrongdoing. “They put that on to embarrass me.”

The president did not reconcile the fact that he’d managed to undercut his own claim that, as his attorney, Cohen was solely at fault, by later adding that Cohen didn’t really do much legal work for him after all.


Beautiful.
Posted by Vixen Strangely at 11:26 AM