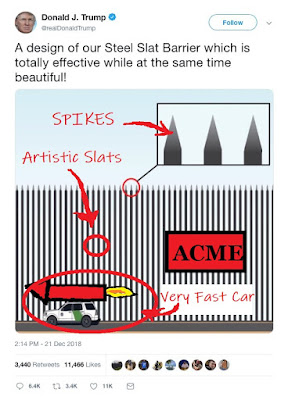 The recent shutdown (the third of Trump's term in office, all three with Republicans in the majority for both houses of Congress) over Trump's desire for a big beautiful wall (or "Steel Slat Barrier", which is aesthetically more attractive, maybe, more politically correct, entirely as racist, and of course, see-through, which is important because Safety! and Transparency!) seems to have a lot to do with whether Trump is seen as weak in the eyes of such brilliants minds as Rush Limbaugh, Ann Coulter and Laura Ingraham. He knows that if he disappoints them, he will never hear the end of it from his base, who largely exist because of the brain-tenderizing skills of people like Limbaugh, Coulter and Ingraham. He could have had some pretty sweet funding for his wall, a shutdown or two ago, if he only agreed to DACA, but his fear of pundit disdain killed that notion. And Dems caved, because they didn't want to be seen as the problem, here.

This difference this time around though, is Trump already took vocal ownership of the shutdown and can't re-gift that son-of-a-bitch for political Pollyanna. And unlike last time, the House of Representatives is going to change parties in literally a matter of days. He might be facing quite a different situation.

One thing is, it's Christmas and he's just told a couple hundred thousand federal workers they need to work through this thing without a paycheck, a few hundred thousand others they don't actually know when they will be working or seeing a paycheck again (and sure, they could, would, should get back pay, but your bills are due when they are due, and that can be a problem for working and middle class people who may be living paycheck to paycheck especially when expenditures have been made to celebrate a holiday). And he's done so over a wall that won't work and appeals to really just his base.

Which would all by itself be a big old "whut?" that leaves us questioning his priorities and whether he gets what government is about at all. But when he also says things that makes us wonder if he knows that the "coyotes" we worry about on the border are not four-footed, then we are at the point where it is hard to parody Trump, because he is just so underprepared to fulfill the requirements of this job, even two years in, that it is hard to find the humor. He says he knows things, but he gets all his information, even after having gained access to the US' top intelligence, from goddamn Fox News. And Lou Dobbs has had brain worms for a very long time.

This could look like a situation to play solely for laughs, if we forgot that thousands of migrant children are held in US custody, and the head of Homeland Security Kirstjen Nielsen can't say how many people have died in DHS custody, even though she should have intuited that this was sort of question she might have been asked in the wake of the death of a seven-year old girl, Jaklin Caal Maquin. The "wall" has become such an item of importance to DHS that they've lost their articles over it, because we needs wall, precious, and filthy libses thwarts us!

I have half a notion that if this wears on, instead of caving, Schumer and Pelosi should actually put DACA back on the table. Just give him the original $1.6 billion he originally rejected because he got his ass reddened by the RW talkers, and make a demand regarding how he even gets that much out of Dems. Because Trump's cards are all on the table. He wants his wall funding and he needs it to make his base happy. (His "art of the deal" is so terribly naked and on display here.)

Dems don't love a shutdown, but it might be really nice to see Trump's "My way or the highway" attitude get greeted with "Eat asphalt".  Because he is by no means a super genius. He's just, sadly, what the Republicans have got, and this is why they are sticking with him. And if what he wants is wall, well wall is just a major fucking concession to unracist our policies away. Let's leverage that shit.

Also wall will still not work and the separation policy is inhumane and Tornillo should be shut down.

I feel like there is a way to get better out of this schmuck. In spite of himself.

Posted by Vixen Strangely at 12:44 AM