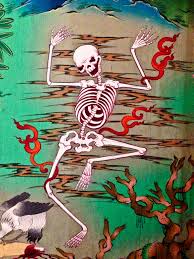 Retired General Jim "Mad Dog" (although he doesn't actually even like that nickname?) Mattis served his country for a good long while and sort of had a bug about Iran that made Obama accelerate his departure at Centcom. But he was actually sort of good for a Trump Administration pick. He even resigned with a kind of decency and generosity--although his resignation didn't offer any compliment for the CINC he served, he nonetheless offered to retain continuity by working in his office through to February 28, to give the President reasonable time to find a replacement.

Alas, Trump watched enough tv this week to figure out the hidden disses of his foreign policy that were lodged deep within the hidden recesses of the Mattis resignation letter, that might have been unlocked by anyone with a fifth grade reading level. Incensed, he directed his Secretary of State Mike Pompeo to do the actual dirty business of telling Mattis to box up his shit and git. That is apparently the way he rolls.

In other news, the US envoy who was overseeing the diplomatic efforts regarding the war against Daesh, Brett McGurk, accelerated his own departure in response to Trump's precipitous decision to withdraw from Syria, and to mark this occasion, Trump saw fit to "neg" him.

When, really, Trump should have known who this was and probably consulted with this guy before deciding on a withdrawal during a phone call with Turkish president Recip Erdogan, because even Erdogan was kind of freaked out about how quickly Trump wanted to let him go and most likely attack Kurds, or whatever. (See BBBB for his thoughts on how we are screwing over what should be our great allies once again.)

It's stupid that Trump said that he did not know his top guy doing State shit in a key area of the Middle East, but it's also stupid that his Acting Chief of Staff has to try and explain why Trump doesn't know him:

And it's because Trump doesn't "follow this topic". Which is actually seriously infuriating, because Daesh is a kind of big deal, and one Trump promised he had a very special secret plan for. Of course that was obviously a lie, but it's disgusting he doesn't cover up his failure to perform even the minimum of following through on his lie even the least bit.

In the meanwhile, everyone might have noticed that the DOW and Nasdaq and all that have not been doing the greatest, and probably chalked that up to the economic uncertainty caused by the trade war and the shutdown and so on. But in an alarming aside, Treasury Secretary Steve Mnuchin has been phoning the heads of different banks to just check in and make sure they are liquid, NOT THAT THIS IS A CRISIS OR ANYTHING, and saw fit to broadcast those conversations over social media which is very normal and not at all likely to cause anything like AN ENTIRE FUCKING PANIC. Not that we would know if there was any reason at all he should FEEL THIS WAY given that the Trump Administration has no grown ups.

The Trump agenda is motivated by pettiness, and now, panic. He blames the people around him, like his aides, or like Fed chairman Jerome Powell, for things he should look in the mirror about.

He was unqualified to begin with, and is proving to be an unqualified disaster. My disdain for those who can still support or even stomach his reign of error only grows.

Posted by Vixen Strangely at 1:00 AM

I believe you have this administration pegged about right. Panic and pettiness seem to be prime movers. A sort of tragi-comedy. Kind of like Get Smart come to life. Step into a bucket, stagger about the set and cause a few thousand more to die in Yemen.