Fox News Does the Full Monty 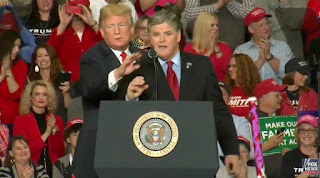 It's always been just a little bit obvious that Fox News was more of a political advocacy outlet than a straight news organization, but if there was any doubt, popular Fox News hosts Sean Hannity and Jeanine Pirro joined Rush Limbaugh in standing up for Trump and his party's candidates this evening (right before the midterm elections). They could maybe pretend they were just there to report from a very special vantage, but let's be really honest, that vantage was earned by being propagandists and useful to the party. This is what a wholly partisan effort would look like. They also derided other news outlets, laughably, as being "fake" while making this particular obvious show.

I think people who really pay attention have some idea who the fakes are here. Pirro, Limbaugh, and Hannity might be popular, but they surely aren't honest, and what they do has never been about straight news. Limbaugh doesn't pretend to be an honest purveyor of the tea--he stresses from time to time that he is an entertainment figure (probably not to land his ass in trouble). But Hannity and Pirro?

While they are joke figures outside of the Fox milieu, among Fox news fans, the possibility that Hannity delivers real news is apparently some kind of open question, left open, deliberately, but Fox itself. (I think the same nebulous area exists for Pirro, to the extent that she is treated as being sober as a judge when both the "sober" and "judge" portions of that assessment appear to be way off.)

I may be off base for pointing out that while Brett Baier and Chris Wallace are probably kind of good, I'd really only consider Shep Smith actually wholly a journalist in the sense of not radiating bias. (That probably radiates bias in and of itself to some of Fox's conservative viewers, for a value of bias that reflects Steven Colbert's observation that reality has a liberal bias--and maybe it sort of does.) What Fox the tv channel was set up to do for people who care about these things was be a conservative and Republican-leaning outlet.

Now, I don't want to reinvent the wheel, discuss the hack gap, broach the problem of right-wing epistemic closure, or even just point my English Lit degree-having white liberal finger at the tribe Morlock and curse their darkness while they eat my daywalking Eloi sibs.

I just want to point out that Trump doesn't and never has had a problem in the world with fake news. He was best-buddies with the National Enquirer guy who kept hot shit-takes on Trump in a vault and is no stranger to just making shit up or repeating ridiculous conspiracy theories from the absolute underbelly of the fever-swamps--like birtherism.

Trump loves fake news (like Alex Jones, even!) no matter what terrible things he says about the real news being terrible and fake. But you know what? That old devil "fake news"? When Trump surrounds himself with these Fox folk, he is soaking in it!

He just likes the news that magnifies him over the kind that tells bad stories about him. Only, there are plenty of bad, real stories about, and news isn't really about what Trump happens to like to hear.

I'd like to hope this moment had any bearing on whether future news-watchers bothered with the Fox brand in the future, but, no. I doubt it. I believe they watch for reasons wholly unrelated to veracity.

(UPDATE: It is possibly also objectionable if Kellyanne Conway and Sarah Huckabee Sanders do these things because of the Hatch act, but really? Are we going to expect the White House to actually be the paragons of virtue, here?)


UPDATE 2: See what I mean, Vern? Does saying it's not an endorsement really "disclaimer" it? 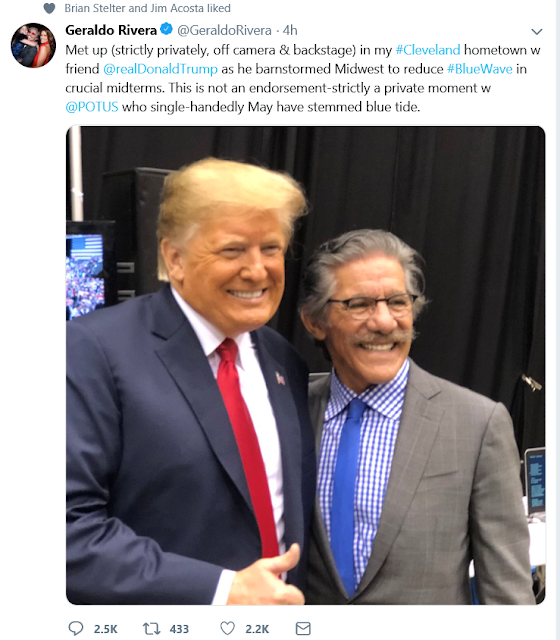 Posted by Vixen Strangely at 1:02 AM

The greatest headline of the day (No, make that "the year"--maybe even "the decade")
Props!