The Only Orange Muppet I Fully Stan

Of all the absurd 2018 things to happen, one of the best Philadelphia-flavored ones has been Gritty, the mascot of your (my) Philadelphia Flyers. I haven't actually actively followed the team since the Legion of Doom days, but have stayed an admirer in absolute principle, as I have for the Iggles and the Phils, because it is my duty as a homer and because "No one likes us."  Indeed, Gritty became my red-headed brother despite what I thought at first was a corny, googly-eyed misfire--people outside the city called him out.

Bitch, that's our corny, googly-eyed mascot. You get back in line.

And then he got co-opted as an Antifa icon. 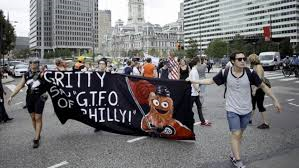 Better yet, something about Gritty being Antifa in the local political culture (Philadelphia is demographically brown, resolutely Democratic, fiercely working class and eccentrically progressive--with dashes of old-school racism and class war getting their ass regularly kicked) pisses off the people who by all means, need something to piss them off and entertains the people who need to add humor to their activism.

Twitter has embraced the orange-bearded hero we all deserve:

Gritty is one of us. Late for Occupy, but not too late for the assizes to come. I don't expect a stadium of orange-jerseyed sports fans to switch in their preference from "God Bless America" to "Bella Ciao" anytime soon.

But we have a mascot. And as we are the City of Brotherly Love, he is also with you. Join us, you have nothing to lose but your chains.

I read the story at the link and I'm still not sure how this happened. But it's good that he's not a fascist. That would make me sad.