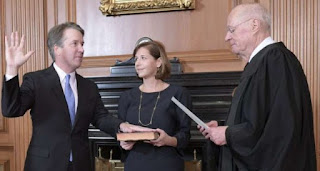 One of the tropes engaged by the pro-Kavanaugh side, which won, and to them, all due congratulations and warm salutations! was the idea that the people who were present to provide direct protest to his nomination and confirmation were paid, possibly by George Soros, because no person in the history of ever would be morally opposed to a political operative credibly-accused of being a sex pest whose wholly partisan elevation was given the go-ahead with the clearance of an FBI (Fig leaf-Backed Inquiry) investigation. I'm of a differing mindset, of course.

I hold that problems can bite you no matter how tightly you close your eyes to them. And I also posit that any singular thing that escaped investigation prior to Kavanaugh's Supreme Court installment will by no means go unheard in the post-installment era. On the contrary--there will be a sense of personal investment in whether future information is heard, as it might not have ever been had only a fully coherent and comprehensive vetting taken place (to pre-squash all relevant opposition instead of letting it become a festering and divisive thing).

Yes, this is the post of a dedicated cynic--what I'm really decrying here is that all of this Kavanaugh shit seems so lazy. He's an operative and a hack, a Bush appointment to the Federal bench for reasons and a child of privilege. I am certainly not claiming that the Trump administration would ever give us better! But in the handling of the whole deal I'm pissed at played by an amateur hand. The Trump admin could have made sure more docs from Kavanaugh's time as a federal employee were released so it looked less like info was being hidden, and since even McConnell knew full and well Kavanaugh was a part of the Pickering and Pryor judgeships' vetting, why not be more forthcoming? Are we really supposed to be dead shocked about any conservative POV's coming from a conservative jurist? So much of the handling here was bad stagecraft--as if wanting to get liberals pissed at the lack of transparency. Trust--this process could have gone smoother.

I also wonder who exactly was the aide who leaked Dr. Ford's info. I am not wholly certain it was only Diane Feinstein's people who were aware it existed, anymore than I credit this gap in knowledge with the presence of the girl's teams Kavanaugh coached at his hearing and the initial letter of 65 female students of schools about his era, and the asseverations of his good-guy status from assorted clerks that he boosted. They look, in retrospect, like an inoculation from being called a creep in the advent of future revelations.

There was no good faith in his selection about whether he would be an impartial voice. There was no impartiality regarding whether Dr. Ford or any other person willing to give testimony against his character would be heard--these people were always going to be marked as being mistaken or partisan for trying it. The voices of the disbelieved and believed too late, the voices of real women and men who, like Dr. Ford, wanted to just be heard out, who protested for and about her, were secondary to the process of getting this one guy on his SCOTUS seat. The Republicans gave lipservice to "believing something happened to her" but disbelieved her actual statement as 100% to whom it pertained. They fell in with the Whelenist "mistaken identity" doctrine, as flawed as it was.  And yet, that theory revealed a bit too much--it could not have existed had someone not been tipped off about details of the event that everyone (Republican) wants to pretend did and did not happen. Just as they want to pretend the Yale Ramirez claims have no merit, even if Kavanaugh appeared to be doing work to get in front of them.

I'm just a poor old non-Soros-funded blogger who even took a long-ass break this year to not blog for my mental clarity. It sure does look to me like every GOP step, even Flake's request for investigation and Susan Collin's false ambivalence and later, utterly shameful, political obituary speech, was calculated to incense liberals. The advancement of Kavanaugh was always a foregone conclusion, and any stall was by the leave of GOP senators who could then pretend they were being very big, after all. Big as fuck. For not just saying, "This is our man" and moving altogether on, with all the not-filibuster-needing majority they got.

It was GOP base rallying theater. It was furthering the line that it was the dangerous leftists who are elevator-cornering political theater dramatists, snowflakes and screamers, who bullied and doxed and otherwise were pests and made the "conservatives" too uncomfortable to hear them out, and actually forced them to approve of Kavanaugh.

To all the protestors--you did great and are great. Your stories matter, and their justifications for why you were ignored and your concerns went unheard stay about them, not you. You are loved and admired by me, forever, and you stay blameless and whole because no motherfucker can take away what is best about you. You are you, and nothing takes away that simple, beautiful thing, you only have experiences that are shit, and shit comes to shit people who make that their way. You did not make Kavanaugh happen by existing, protesting or telling your stories. But the GOP mindset, at present, made your stories their reason to let a political hack be their best chance. And made you the enemy. Made me, too, for opposing him.

They will say the shrieking leftists and their presence and protest made the Kavanaugh swearing in their goal, and feel good--I say it means politics will need other means, and the ballot box became the leftist grail as it never was before, because the most direct action is voting. It was why iron-jawed sisters marched and sat in jail cells. It was why voter registration is forever linked to lynching in this country.

Before they can take it away--vote: don't get mad, organize, don't boo, vote. Had only more people voted for Hillary Clinton in PA, WI, etc, we could have had a liberal SCOTUS. And no person in the US would be wondering if reproductive freedom or custody rights, would ever be left in the hands of a rapist. We would not wonder about the future of government subsidized health care, or our rights to vote or marry or be our open gender representation. Because she (the president we could have had) would have had our back.

I am not mad, and no RW operative has "pwned". But days like today are the greatest call to organization we could ever need.  Vote Democratic everywhere, even if only to preserve the Dem Caucus. The alternative is not unthinkable, it has only become too real.

Posted by Vixen Strangely at 1:19 AM

You provide a ray of hope where before only existed darkness. Thank you for your words, for your dedication, and your will to keep moving forward.

Damn that Soros! He owes a lot of us some good hard cash, and I really wish he'd pay up.