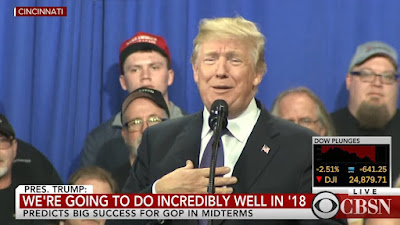 The last handful of days have been a little bit of heart-in-mouth time for some traders on today's market, as record sell-offs have been occurring, causing as of just today the largest drop in points in the Dow's history--which is not really saying a lot, yet. This probably is reminiscent for some of the point drop in September 2008, but that had been building for some time, and had a lot of other poor indicators--I don't know if this is the same thing at all. I don't think it's directly ascribable to Trump, although he likes to take credit for the economy, so...

Job creation has slowed here in the US--but that's not surprising as we are nearly at full-employment, and wages are going up, which did not just start happening in the Trump era, thanks, but when labor starts to have an edge, capital worries. As a wage earner myself, I like stronger wage and employment figures, and prefer my investments and pension plan to be about the long-term index, and I don't yet see a problem there...

Except the deregulation thing. See, I have noticed that Trump is trying to pry the brakes off what he sees as "the economy" because he and Republicans in general seem to think that rules make the game harder, and then nobody wants to play. However, what they do is fuss about currency and capital, and make stupid choices like tax plans that favor the rich. Companies like to take profits and pay dividends. This doesn't go into the hands of the people who will turn around and spend it--labor.

I don't know. This is a little correction. The dollar is weaker in anticipation of inflation, but the job market is still strong and the consumer confidence is there, but I feel like there is a certain level of volatility that might be political in nature.

The market doesn't like instability or insecurity. I feel like our US leadership is just a beehive of instability and insecurity, not because of the fundamentals, but because of the intangibles. Like, the current president of the US does not understand why nuclear first strikes are bad or why you invest in disease control or why sowing racial animosity here or abroad is stupid.

I'm bullish on anxiety and bearish on returns. Keep your money where it is if you are in a conservative fund. But day traders are going to be falling out in this mess at least this week.


EDIT: The Nikkei and tomorrow's futures do not really make one feel confident though.
Posted by Vixen Strangely at 12:25 AM