The President Believes his Own Hype 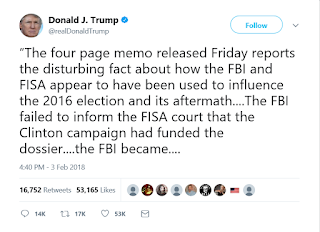 For some reason, releasing the HUUUUGE four-page memo which had been hyped to the rafters as an explosive indictment of the FBI doesn't seem to have released the earth-shattering Ka-Boom! that the President was expecting. This might have something to do with it being badly over-hyped by people who hadn't even read the thing--like Seb Gorka confidently saying that the abuses by the FBI would be revealed to be a 100 times worse than those that started the American Revolution. Really?

You might come to think that a partisan Fox News assshat was running the press on this entire debacle, and you'd probably be on to something.

This sort of thing left the White House's designated adult, John Kelly, to try and caution that it might not do all the things that were printed on the label.  But the memo got dumped on Friday after Trump gave it what I assume was a light skimming, and determined it didn't matter at all what it actually said, so long as there was good coverage of what is was supposed to say.  The memo focuses on what were supposed to be terrible omissions of fact regarding the FISA warrant that lead to surveillance of Carter Page. The text of it lays out a case, but it is both brief and one-sided.  Consider the basic claim that the Steele dossier was part of the request--part, but not all. Carter Page has been on the radar of US intelligence since 2013. Consider also that the warrant was regularly renewed--we are supposed to be impressed by the names of the folks who signed those renewals without noting that each warrant had to have fresh justifications--in other words, the situation had to remain informative and relevant.

And we have every reason to think it did, because Carter Page is, as a bygone tv game show might have stated, "the weakest link". There have been great reasons for Carter Page to be under surveillance because of a really weird connection to the Russian government. And we still learn fun thins about him to this day, like how he boasted that he really was a Russian adviser. To the Kremlin. Like, he was working for them.

This is hardly the hill that I think anyone would want to go to war with a federal agency on. And yet here is Trump in the above screen-cap of a Tweet, quoting a WSJ editorial that alleges a central point of Trump's lie that the FBI tilted the election to Hillary Clinton, who lost the election. Because we are supposed to believe that the FBI always really loved Hillary Clinton. Louis Freeh sending G-men to rifle her underwear drawer for Rose Law Firm receipts going on twenty-odd years ago, in what world is that a goddamn thing?

Trump might like to think this thing has absolved him, and that, as Hannity's godforsaken show keeps implying, the Mueller investigation should be shuttered because collusions hasn't been positively confirmed. This only works for people who can't or don't read. Among people who do read, DJT Jr's email thread regarding affirmatively accepting a meeting with a person said to be representing Russia pushing dirt on Clinton that was obviously obtained through hacking with a side discussion on (sanctions) adoptions remains a pretty good whiff of collusion, as does Trump Sr's constant signal boosting of WikiLeaks. The four page memo might make a suggestion that a better pretext should have existed for a warrant to have been granted on Carter Page (which doesn't, in hindsight, even look like that great a suggestion), but one of the larger narratives that it was supposed to feed, that the Trumpists rely on, is actually quite exploded.

One who reads the memo learns that the Steele dossier, is not, actually, per the memo, the reason for the Trump/Russia investigation. And the FBI people who were supposedly not pro-Trump enough got reassigned. As if the FBI actually tried to make a wall between personal relationships and investigations. The memo mentions that George Papadopoulos talking to an Australian diplomat was the tip off, and Strzok was reassigned. These things actually negate some of the conspiracy theory bullshit that has been out there.

Maybe between the not as bad as could be SOTU address and this memo, his poll numbers will go up a smidge. But just between you and me and the universe--Trump is not absolved and the investigation is nowhere near over. And if he keeps this naked kind of open consideration of firing folks investigating his very own malfeasance alive, and goes on to carry it out by firing Wray or Rosenstein, this is a deep problem that should, let you all know that every piece of this Trump Russia connection story was real. And he is guilty of so many things, but believing his hype was always a big part of them.

Posted by Vixen Strangely at 11:40 PM

Naturally, in my part of the country people see Trump and his activities in a much different light. Basically in my part of the world there is great approval for him and his initiatives. I suppose there's a great variance between red and blue states.

I still see all of this as the early stages of the new zeitgeist. I feel more firmly about this theory than I did earlier. One reason is because of events that have not been caused specifically by politics.

The Hollywood scandals have discredited the authority by which some in Hollywood were seen. And the protests in football are causing a lot of fans to throw up their hands and discontinue watching. A competitive football league, the XFL, is starting up to compete with the NFL so that people who wish to escape the worries of the day don't have that forced on them when they go to their venue. A lot of events that were not specifically caused by politics seem to spontaneously be arising. I think this is an indicator that we're in the early stages of a zeitgeist change.

I'm fond of saying we see the patterns in the desert sands, but we don't see the wind responsible for the shapes. In Qaballistic terms the intention part of the zeitgeist is to be found in Yetzirah. It is unseen, but operates in the psychology of Man and also the macrocosm. However, if the movement originates in Yetzirah, it can be turned around in time. But the motives can only be seen in Briah. And if the movement is connected with Briah, then it cannot be stopped. It would be anchored into a level of archetypal reality so deep it would inevitably work out its motives and intentions in the physical world (Assiah of Malkuth).

The good news for the left is that as powerful and enduring as the zeitgeist may be, it will eventually come to an end. The old zeitgeist that created the new left lasted 60 or 80 years. So I don't believe I will see the end of this new zeitgeist in my lifetime. It is conceivable you'll see a turnaround n your senior citizen years. It's hard to know how long and how powerfully it will endure. But eventually the right will go the way of the leftist zeitgeist, and a new generation will find a new direction. As I've said, the right and left trade back and forth in the United States, and it's simply inevitable. There are shorter and longer cycles, and there would be a lot less psychological wear and tear if people realized that.

I'm of a different mind--in part because I don't think most people view Hollywood as an authority but as one headquarters of a worldwide entertainment industry. I think that as globalization increases, a kind of levelling is necessary, where places that were once cozy elite centers might experience not only economic but social disruption as the intersection of various viewpoints create tension. Same goes for Silicon Valley--or Wall Street, or Washington DC. Entertainment, technology, finance and government happen both at the local and global level and there is no actual escape from the hell of it all--what Sartre rightly explained was "other people".

But what of "others"? Take the escape from the tension of racial politics (which has long been a part of sports) that might be promised by a reboot of XFL. (McMahon tried this before for one season in like, 2000 or 2001, and it was a bust.) I'm skeptical that it will provide a challenge to the NFL because of the flaws already in the NFL--what would the competition need to be and do to become competitive? Knowing the sports/entertainment model that McMahon has exploited in wrestling makes me doubt of its success because he is a disrespector of persons. The wrestling business relies on an early 20th century stereotypology of ethnicity and religion and hucksterism. Female talent is still viewed through a misogynist lens. Athleticism is prized, but the actual health of the talent is disregarded. Too many of the wrestlers I grew up watching are dead. They broke their necks, they took too many drugs, they abused their bodies, their brains broke. Mr. McMahon is not going to use football players any different way. He will create a spectacle for money and it will be just as booked as tv wrasslin' ever was. I don't think the NFL is made to endure--what they did in making Kaepernick a pariah shows that some owners of teams kind of feel like they are owners of the players, and there are some properties they don't want a piece of.

But insofar as some players are using their platform to be role models of social justice, I think they are using their athleticism as artists use their works--to challenge people not to be passive spectators but to really engage and feel that the sweat they put out there comes from human pores. When I think of folks like my Philadelphia Eagles' Chris Long, who gve up his salary this year to charity after seeing the harm of white nationalist operating in Charlottesville, I am proud of this team member and how he represents my city and our diversity and the spirit of Brotherly Love.

I might have once allowed that my view that the age following the age of Horus should be the age of Maat. We need to put away the things of a child and start facing truth. If we all agreed to focus on facts instead of spin, and face realities instead of conspiracy theories, much more might be accomplished.