The State of the TrumpWorld Grab-Bag 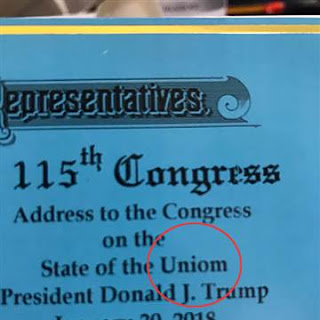 I didn't really pay attention to the State of the Union address because I'm starting to think these staged deals don't really signify all that much. For one thing, they should probably be called the State of the Current President Address, since they seem to be about the president's vision of what the United States is about and what he (or, someday, she) is going to do about it. Your level of approval of the speech probably has as much to do with your level of approval for the current office-holder, and if that's not much, well, you won't think much of that speech, then. And given the current president, I figured it was sure to be a bit dishonest.

And as for the rebuttals, and I guess we are going to now have multiple liberal responses since there is a Republican in office, the general effect is something like a BBS forum in ye olden 14.4 days. It's not what one would call a rapid response. I had half an inkling that Trump deliberately spoke slowly and had a speech padded out with boring talk to push the response speeches from the opposition until later in the evening to dull their impact. (I think the Kennedy youngster did good, even though he was excessively Chapsticked and sometimes seemed to be falling into his very best Barack Obama cadence. His speech was brief and inclusive and spoke of a much less divided America where we didn't leave people behind so others could get ahead. I liked that very much.)

As for hidden messages amongst the muted dog-whistles of Trump's speech, the one thing that I and others found a bit chilling was the implication that Trump meant to see Federal employees to the door if they weren't on board with his agenda. I know that a kinder, gentler interpretation of this part of his speech might just indicate a weakening of civil service protections to ensure that non-hackers who just weren't pulling their weight get the axe because a federal job ain't a hammock. That's fair. Nobody likes to see taxpayer money wasted. But I've been interpreting this sentiment from Trump differently since way before yesterday. And this is particularly true just now, since the hot new word going around on Fox News and from House Speaker Ryan is "cleansing". There has been a greater turnover rate during this administration,  than has been seen for years.

But one of the problems here is that Trump seems to think he needs to get loyalty from people he interviews. For some civil and public servants, it's really enough that they pledge loyalty to the Constitution, and at least consider the rule of law their polar star. But he has variously leaned on Jim Comey for his loyalty and sacked him when he did not get what he wanted, sacked Preet Bharara and Sally Yates for having a peculiar lack of faith, and has apparently even tried to get Rod Rosenstein to admit to being on "his team".  That sounds needy as hell.  It really does seem like Trump doesn't want any kind of independent government agencies, but wants people who answer to himself, not the voters or taxpayers or the Constitution itself.

Which brings us to the ongoing Nunes Memo saga, which suggests that even powerful members of a separate but equal branch of government, can be momentarily compromised, because this daft git seems to have recognized that the thing in question didn't do all he wanted, and tried to alter it.  This information comes after the FBI indicated that this memo was likely chock full of wrong.

I'm glad that the FBI under Wray is still expressing it's independence. After some of the "text message" charade regarding FBI agents Strzok and Page being critical of Trump meaning they would try to throw the election (although there never was any indication any negative thiing about Trump from any investigation ever leaked) it is interesting to know that Pete Strzok actually helped fuxxor over Hillary Clinton bigtime.  So much for the "rigged in favor of Hillary" thing. It is amazing what comes to light after all, eventually.


There never appears to have been any rigging in favor of Hillary Clinton at all, which sort of undermines the "rigged" cries of one Donald J Trump.  It's really as if he might have been the one to have help. I really must say. Which sort of does point back towards Russia helping Trump--a lot, materially and obliquely. Or so my eyes do say.

Also something to do with Hope Hicks.  . Because she witnessed Donald Trump using the White House to try and sort out his son's messaging, and also probably stated for a kind of record that DJT JR would not just...Tweet all his bullshit out. Like he did. This sounds bad because it is bad.

Posted by Vixen Strangely at 12:42 AM

SOB only warned us for months the election would be rigged, and we still don't believe him.