Trump is Having an Angry Weekend

CNN's latest reporting about Trump's weekend: He's "watching TV" and "getting riled up by his sons who are encouraging him to go harder on FBI" pic.twitter.com/BlRlHzC2AB
— Brian Stelter (@brianstelter) February 18, 2018


I think it's a little bit astonishing that after being relatively satisfied with the Mueller indictments and Deputy AG Rosenstein's press conference, and then a nice photo op with Broward County first responders (since he and Melania were already in the neighborhood) followed with a Studio 54 disco party but, sadly, no golfing!! Trump allowed himself to get all riled up by his two large adult sons and go a-Tweeting in the most disgraceful manner. 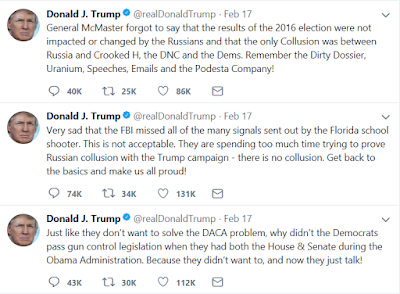 This collection is where Trump, annoyed at his press, starts blaming others for shit. He blames Democrats for not passing DACA (they are the minority party in Congress, and he himself actually ended DACA) and not passing gun control (see also--the minority party but they tried). He blamed the FBI for not catching "all the signals sent out" by Nikolas Cruz and blames this on the focus on the Russian meddling the ine 2016 election (specifically, the "collusion") but seems unaware that with 35K employees, the FBI can do numerous things at once, and that there really is no legal way of holding someone on suspicion of being really screwed up and dangerous forever--it isn't a crime to just be screwed up and owning guns. There was little they could actually do there because maybe the laws are kind of lax regarding dangerous people getting guns?  Seriously--using the 17 dead bodies in Florida to fig-leaf the investigation into his campaign ad Russia is damn low.

He also wants General McMaster to go beyond what the indictments or what Rosenstein said and publically waive him from allegations that the election results were impacted or...various conspiracy theory bits of glurge that I term the "Trump trots". If you are familiar with the "gish gallop", the Trump trot is the same thing, only a stickier mess of nonsense delivered by Tweet by a US President.  The Democratic party or the DNC never would have colluded with Russia to...smear Hillary Clinton and install Trump--that's just a fucking stupid thing to allege. There's no sign they did anything at all to boost Hillary Clinton during the election. Also, Uranium One is just really dumb and already debunked an awful lot. The Steele Dossier is not debunked, but holds up. The rest of the tweets that burbles about "Speeches, Emails, and the Podesta Company!" is just sad. Really sad. Throwing spaghetti at the wall.

Donald Trump doesn't seem to get that he is in office right now because these bullshit things got pushed even though they should not have mattered. Trump got paid large money for Wall Street speeches, just like Hillary Clinton. His transition team and his White House staff are using private email trust me. Also his son in law Jared (let me amend this here form) Kushner is not only not supposed to have a security clearance, but is requesting lots of classified info.

What Trump is saying is bullshit, but he isn't thwarted, because he is apparently quite peevish: 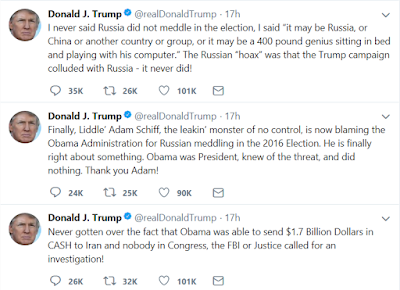 Here we go--he references the dumb "pallets of cash" thing he swears he saw on Fox News which never happened to pretend there is a scandal about the thing where the US refunded Iran money they paid us for weapons they never got. He's just a bit mistaken as to what happened there.

He insults House Democratic Congressman Adam Schiff for a thing he hasn't said. And then he disgracefully lies about his long-held position regarding Russian meddling, which has been that Trump treated it as entirely a hoax. He hasn't admitted their wrongdoing even still, is blaming everyone else in sight, and never has either brought the additional sanctions requested by Congress or suggested any other punishment. In fact, I kind of think being back on his bullshit about why the FBI is supposedly wasting their time with the Trump connection to Russian meddling is, in a very real way--more obstruction, very much along the lines of firing Comey quite obviously for his attention to Trump's Russian connections.

Although I have not ever really figured out when Trump was at his smartest, I can safely say that the experience of angry Trump is fairly dumb. The position of President is stressful enough as it is--but most likely more so for a person woefully uninformed with a staff he either distrusts or which is also incompetent and probably not suitable to be there either.

This sort of thing is very sad and transparently an admission of knowledge of guilt and rank incompetence on his part.
Posted by Vixen Strangely at 1:23 AM