Trump Did Not Have A Great Day 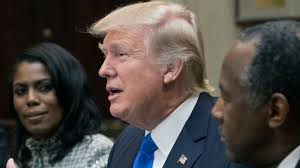 Just for the record, April Fool's Day is still April 1st and has not been moved up to February 1st, no matter what kind of fooling went on this Wednesday. For one thing, it was the first day of Black History Month, so our President, Donald Trump, sat between Omarosa and Dr. Ben Carson to say some very important and historical things.  Here's a sample:

“Last month we celebrated the life of Reverend Martin Luther King Jr., whose incredible example is unique in American history. You read all about Dr. Martin Luther King a week ago when somebody said I took the statue out of my office. And it turned out that that was fake news from these people,” Trump said during his introductory remarks, gesturing at the pool reporters who had been allowed in to view the start of the meeting. “Fake news. The statue is cherished ... but they said the statue, the bust of Dr. Martin Luther King, was taken out of the office. And it was never even touched. So I think it was a disgrace. But that's the way the press is, very unfortunate.”

This is how you know he's genuine--he thinks the bust of Martin Luther King, Jr belongs in the Oval Office. And the lying media tried to own him over it--so who is really very discriminated against, anyway? Also, too:

I am very proud now that we have a museum on the National Mall where people can learn about Reverend King, so many other things. Frederick Douglass is an example of somebody who’s done an amazing job and is being recognized more and more, I noticed. Harriet Tubman, Rosa Parks, and millions more black Americans who made America what it is today. Big impact.

I wonder if he knows Frederick Douglass from Morgan Freeman. Nota bene: One of them is alive, and has played a president more believably than Donald Trump. I'm just saying.

But Trump went on from there to do a little statesmanship. Before his graham crackers and nap, apparently. He seems to have possibly suggested marching federales into Mexico (possibly the same or different from the ones he's marching into Chicago) to address "bad hombres".  Which is kind of condescending and threatening of their sovereignty and gross-- and then he called Australia and boasted about his electoral win (which isn't that boastable TBH) to Malcolm Turnbull, and ragged him over a refugee deal Trump pretty obviously only just found out about.

This being the same day we all realize just how screwed up his first ordered attack in Yemen was, and have a picture of how personally liable he is as POTUS, reminds me of how much respect I have for this office because of the stakes--and how serious it is that the holder of that office be competent to serve.
Posted by Vixen Strangely at 12:48 AM