There is something so exciting about "alternative facts"--once someone in Trumplandia makes out with one of their regular shocking falsehoods, it becomes a kind of anthropological study to sort out where their bullshit came from and how it's supposed to support their narrative. It's hair-raisingly awful, but if it wasn't liable to lead to tragedy, it would make a sort of neat parlor game.

Take KellyAnne Conway's recent bid at Terrorism Cluedo. Two Iraqi refugees, in Bowling Green, with a massacre, by way of IEDs. Except of course, when she says "Bowling Green Massacre", she means to say a massacre may have been prevented because the Obama Administration found out that two Iraqi refugees in Bowling Green had been associated with IED deployment in Iraq prior to their coming over--which resulted in their apprehension and a strengthening of vetting procedures (which was not either the same thing as this "extreme vetting" mishegas the Trumpers have ordered).

The impression she means to make (if she hasn't somehow innocently conflated several terror/immigration-related concepts, and I believe she is too sharp to have done so) is that refugees are dangerous.  Except in reality, there have been zero attacks from people from the seven countries the EO references. Zero.

But conflation and confusion can be useful when you know your intended audience never fact-checks anything, and is already poisonously biased against the idea that fact-checkers are themselves unbiased. So when Sean Spicer invokes the Marathon Bombing as a reason why the EO exists (not to call it a Muslim or Travel ban, because that apparently gives Sean a sad) the intended audience might not note that Kyrgyzstan is also not part of the seven countries. He mentions Atlanta--which must be referencing the Olympic Bomber, but Eric Rudolph wasn't a Muslim at all, he was one of our homebrew terrorists. And San Bernardino was an American citizen and his Pakistani wife. These attacks are real, but they don't have anything to do with the ban, any more than the Quebec Massacre at a mosque--killing Muslim people, by a white, RW, Quebecois substantiates by any means the EO.


The facts don't matter to them--that the "news items" were real, and can be somehow warped into the weave of their narrative, is all they care about. Well, if rubber inches were real, I'd have a 28" waist--it's a stretch. You can only really distort the facts so far, and just like I actually need to buy pants that fit, counter-terrorism policy needs to fit the facts of terrorism. For example, a US American is more likely to be killed by a right-wing home grown terrorist (like Eric Rudolph, or Dylann Roof, or Timothy McVeigh) than a Muslim one.  (You are more likely to be killed by a falling vending machine than be killed by a refugee from the seven countries). And yet the Trump Administration is thinking of dropping investigation into RW terror, to concentrate solely on Islam.

But this kind of dissembling is trying to backfill a justification for the rapid fulfillment of a campaign promise that was over-sold. When Spicer verbally transforms a Houthi attack on a Saudi vessel to imply that Iran attacked a US ship, things are a little more dire.  That's a whole lie--like an intro to softening us up to accept a war on Iran.

This amusing sport of "spot the lie" is fine for me--I get it, and don't trust a word Conway or Spicer say at first blush as a rule. But for people who play by the rules of imagining that Trump Administration spokespeople are the sources of actual straight news and are not performing a kind of CERN-level fact-particle acceleration by throwing so much shit at the wall that a desired event horizon might open? They will accept there must be a little truth in what actual WH officials say, and the debunking--is mere "libtard" bias.

This is the job they are being paid for, and they seem fine at it. I'm just saying, IMHO--it is not good work. 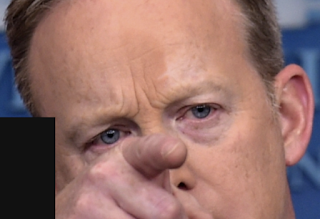 Who sends someone out in front of cameras without blending the bronzer? What lazy asshole did this? I am similar in coloring to Mr. Spicer, and am a hard match for foundation. But right here--the crime is this cover-up. Can someone find a blender sponge and fix this boy before you put him in front of a camera--also too, equip him with less notional neckwear? He always looks like he arrived at a good restaurant without a tie and got to pick one from the lost box. I understand Trump has China make reasonably businesslike larynx lassos under his brand. You know, in addition to not having him lie so damn much. He swells like a blowfish when he's flustered, and it's distracting.
Posted by Vixen Strangely at 12:56 AM