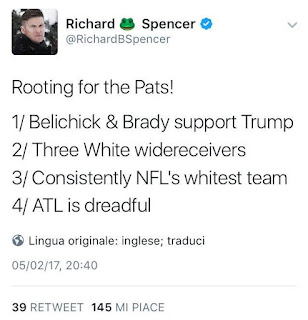 I don't follow sports because for the most part, nothing is actually ever going to be as good IMHO as WWE/WCW/ECW through the mid-to-late 1990's. That was just an incredible era for wrestling, and the fact is, I never bothered to learn all the plays or teams or could follow who was part of what team anyway. I really did super great at fantasy baseball for a couple of years because even if I suck as a sports fan, I am really great at understanding how statistics work and managed to get players like Wade Boggs and Lenny Dykstra in my batting rota to maximize hitting for on-base which routinely led to higher scoring, while keeping stiffs like Canseco off because who needs the errors? He totally gave up more bases than he hit for (homers are a misleading stat).

Anyhow, I don't know much about football even if I once wore one of the world's homeliest Eagles starter jackets back in the day (I think it was like this) when I was dating a total sportshead. (I looked so boss, though, with my mall-bangs, door knocker earrings, and skintight acid wash jeans. I am so glad pictures do not still exist of this late '80's/early 90's incarnation of yours truly, even if I was quite the Generation X East Coast artifact.)

But anyhow, the Super Bowl is like some kind of weird national holiday even for people who don't really follow sports. Even if you don't like football, there's something just right about the everybody eating snacks and judging commercials that feels so uniquely American. We're watching millionaires give each other brain damage, but we're also coming together as a nation to absorb something to say to our co-workers the next day in the break room.

Then along comes this weird post-2016 election season where people are still all politicized and being weird. Tom Brady and Bill Belichik are Trump supporters, apparently. Anyhow, the graphic above represents some alt-right guy making it weird.

Um. I don't really think it's cool to make the fandom of people in the US northeast about white supremacy without their signing off on it, and from what I gather--not all of them really would based on things like the electoral scoreboard. I'm not sure it's really a great thing for Trump that some of his followers automatically assume his support is also an endorsement of white supremacy, but I am damn sure it is not a great reflection on the New England Patriots organization that the alt-right wants to co-opt their talent and sports prowess to try and make some bullshit point--but I don't think the team invited this at all. And I know of so many NE sports fans who manage to be gung-ho about their sports teams while not being actual RW assholes at all! They are cool people who are homers! They just represent with the jerseys and the ticket buys. They aren't like, goose stepping and what not.

I'm just saying--let's not make the Super Bowl weird, where odd political signifying nonsense takes up our bandwidth, instead of factual sportshead stuff like whether the Atlanta defense collapsed and Brady et als capitalized. Let's just enjoy nachos and rewatch commercials like they were shorts put up for Sundance. C'mon. This should be entertainment. Not another "But I want to punch Nazis" day.

FWIW--I kind of always want to punch Nazis. But that has nothing to do with football. And also doesn't always mean "with a fist".

Posted by Vixen Strangely at 12:08 AM