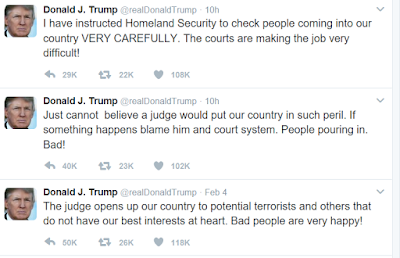 In case you missed it, Donald Trump's EO to restrict entry into the US from seven majority Muslim nations was blocked by US District Judge James Robart, who pointed out the obvious--the ban served to discriminate against Muslim people, but had nothing to do with any pressing threat from the seven countries indicated, because there was never any indication there had ever been a threat from those countries based on prior activity.

Trump, naturally, appealed this. The appeal was declined. Trump's response towards these decisions was basically, if anything happens for whatever reason post this decision--it falls on the judge who allowed "people pouring in". Meh.

It seems to me like appointing competent people to positions relating to national security, and maintaining a good relationship with and accurate information from the intelligence community, would be of more use than imposing a blanket ban on people from any specific region. It would be more easily defensible to collect information and rely on trained counter-terrorism professionals to use the information received, than to justify the restriction of travel by people who have already been cleared by various agencies.

Trump seems to believe that the job of the judiciary is to rubber stamp his whims. They rely on the Constitution, not his preferences, for their guidance--which is as it should be.

He does not seem to have a clear, historical understanding of this basic civic dynamic.
Posted by Vixen Strangely at 1:36 AM

Hi Vixen, a heads-up of something interesting about one of your commenters.

I'm sure you recall a young Muslim named Nasreen Iqbal.

Curiously enough, she took down her blog and apparently left the country right at the time when Trump let it be known that he was going to be investigating Islamic groups.

Very often when someone decides to stop blogging they will leave a note saying so long and explaining their departure. Often they leave their blog up there after saying adios. Nasreen Iqbal wiped her blog without any attempt to say so long, and may have headed for Pakistan.

You may know that there has been an attempt by people who prefer sharia to co-opt the feminist movement. You may be aware that Linda Sarsour who was a principal arranging for the march on Washington believes in instituting sharia. At the match she shouted things at the crowd like, “So you have to wear a burka; you get free health care.” One has to be cautious, because there are a lot of different groups trying to use existing groups and remake them in their own image. Frankly, while some feminists have issues they believe should be addressed, I don't think most of them want to adopt sharia law with all of its bloodthirsty tenets.

I enjoy your blog, but I must confess it is becoming like a comedian with a single punch line. I get that you don't prefer Trump, but there are only so many ways you can say it.

Here are a couple of things I've learned that would help the left start to drag itself away from being a regional party. I saw this on a leftist blog, in fact.
“Note to self:
1. Next time include white people.
2. Next time include Christians.”

And I would add 3. Come up with some real solutions that are actually better for all Americans than the ones Trump offered. If the left cannot figure out a way to actually improve the circumstances of all Americans, then they should approve of what is being done by Trump. Basically as I see it the left primarily tries to get people to dislike a candidate as a form of persuasion. But as you can see, as soon as substantive possibilities were offered, the American populace jumped on it.

I also think that the left is involved in trying to upset the “normals”. This is not a winning strategy. I think it will be a while before a party can win by trying to get people to share their feelings of alienation. In fact alienation is not a good basis on which to try and establish a political philosophy that is better. Much of the time alienation is something a person has to overcome in their psychology. It makes a poor basis for political philosophy.

Actually, she seems to be a dude named Harry, which is weirder still. I DGAF what Linda Sarsour has to say about sharia--the march had many mothers. If my blog is boring you--there is always the option of not reading it. The left is also full of "normals". POC, non-Christians, and queer people are normal. That's one of the regular themes of my blog.

A dude named Harry! What on earth do you suppose old Harry was up to? Was he a simple garden-variety transvestite? Was he a radical terrorist in disguise? Had he figured out an ingenious plan to escape;e the notice of immigration? Very curious.

If my blog is boring you--there is always the option of not reading it.

Ah, more deadly than the adders' sting. I had hoped that putting quotations around the word normal would have been sufficient. Actually, I think your average gay is much more normal than I. A lot of people are gay, and whatever homosexuality is, one thing it's not is rare.

On the other hand, I am a lifetime serious student and practitioner of the magical arts. While some in the establishment might disapprove of gays or lesbians, I would rapidly be put to the stake. (Sometime ago I told you that a group of Baptists were praying for my death.)

I would point out that Milo Yiannopoulos is enormously popular on the right, and Bruce Jenner went to the inauguration. What is normal today anyway? Frankly, the center of the bell-shaped curve is becoming a dubious area.

Surely you have seen all of the discussion in respect to the new breed of sexual robots. They can even come in models that look like movie actresses. They're enthusiastically discussing the implementation of very pleasing personalities that give the owner feedback as well as a tremendously proficient sex romp, and so far this is aimed mostly at the heterosexual market. And you want to talk with me about “normal”? I seriously expect there to be discussions about marriage, voting, and android rights in the not-too-distant future. If the Yuga doesn't come crashing down on us. (We may have 400 or 500 years to go according to the centuries-old method used to calculate these things.) Blade Runner may have been prophetic. And I mean really.

Actually when I used the word “normal” I was not thinking in terms of sexual reference. For me and the gracious & lovely Alicia political normality is Republicans, Democrats, and Libertarians who are not radicals. One of the things about Trump voters is that in a sense his election is also a denunciation of entrenched political parties.

Sadly, not even that interesting--it was "a writing experiment":

Not since I learned that chicken bouillon cubes very seldom contained actual chicken have I been more rattled. (Not very. But still.)