Democrats Should Hold Up Neil Gorsuch 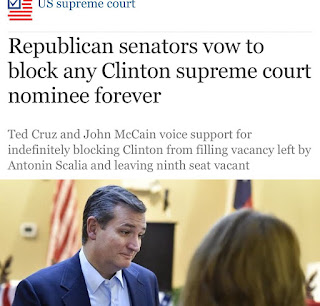 President Trump has named Judge Neil Gorsuch of the US Court of Appeals for the 10th Circuit as his SCOTUS pick, which, to my mind, should not have ever been Trump's pick to make. The Supreme Court Justice his pick would be replacing, Justice Antonin Scalia, passed on in February of last year, and the popularly twice-elected president in office at the time was Barack Obama. By all recognized norms, Merrick Garland should have got a vote. Even a "yes" or "no" vote. He didn't.

So now, we find ourselves with Republicans who are soooooo mad, you guys, at the "unprecedented partisan obstruction" of even things like delaying a vote on Sen. Sessions for AG, or a boycott on voting for HHS pick Tom Price, well, what about how Republicans performed regarding confirming AG Loretta Lynch, or how about that Gina McCarthy boycott for EPA?

Yeah, there is exactly nothing unprecedented about what Democrats are doing, or thinking of doing, with respects to people Trump wants to round out his Administration's universe with. The Republicans gave President Obama constant obstructionism.  They were ready to say that if Hillary Clinton became president, they would block her pick, because it had already been established that the court could run on eight justices. Their justification for blocking Obama's pic was that it was an election year. (There is nothing in the Constitution or any historical precedent backing this up.) They said things like, let the "will of the people decide" who gets to pick the next SCOTUS Justice.

Oh well. I guess the court is able to bang on with eight cylinders. The current occupant of the White House wasn't the popularly-elected choice. And anyhow, Trump has already filed for the 2020 presidential campaign, meaning his entire term is technically "campaign season".

Also this bunny has a pancake on his head: 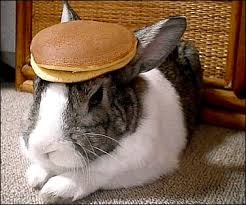 so Trump's pick is obviously invalid.  And Gorsuch's point of view clearly has church all up in our state, and I never like to see that. So I say let's give him a miss, hm?

UPDATE: Is this for real? 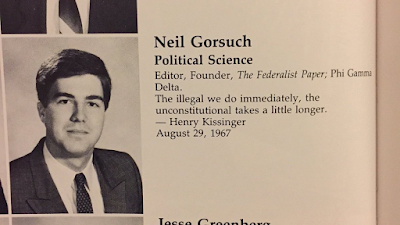 I never have gotten the hang of Young Republicanism. But it isn't really the most fortunate quote to endorse for a future in jurisprudence, is it?  (Although most everyone goes through a pirate stage when they are young I guess.)

Posted by Vixen Strangely at 12:04 AM