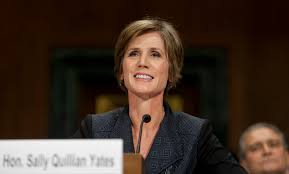 One thing I want to keep in mind about the firing of Acting AG Sally Yates for instructing her staff not to defend President Trump's executive order banning entry of persons from seven countries to the United States is that she is an Acting AG. Trump picked Sen. Jeff Sessions to be his Attorney General, and there's a good possibility he will pass confirmation (although I would look very balefully in the direction of any Democrat that voted for him), so her position was already temporary. Also, it isn't illegal or outside of Trump's presidential powers to do that, if he wanted to, temporary as her position might be. So it isn't really quite the same as Nixon's Saturday Night Massacre--it was an Independent Special prosecutor looking into himself that he evoked resignations trying to rid himself of--which is some dubious and obviously self-serving stuff.

That aside, I think Yates made her position with respects to the EO pretty clear--she didn't think it was defensible. It isn't just a question of preference; she felt there were flaws that would not allow it to survive on a further review and I think looking at how it seems to have been crafted and the overall intent definitely call into question whether it was meant as a de facto "Muslim ban"--take former NY Mayor Giuliani's comments from the other day, for example. It wasn't defiance of what the DOJ is supposed to do--it was her best interpretation of how the DOJ tries to get the thing right (which, based on how this stuffed pig of an EO turned into a several-days international protest, one begins to think the White House made no especial attempt to do).

Criticism of the EO as such isn't even necessarily criticism of the stated intent to keep the homeland safe or however they want to phrase it. For example, it is possible to acknowledge that there are real threats from international terror sources, but that this just isn't necessarily the best, fairest, or most legal way of going about it.

But this is the statement from the "Office of the Press Secretary" (but it reads so much better if you use Donald Trumps voice in your head): 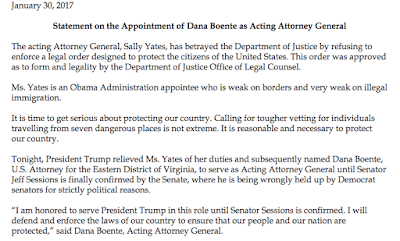 She. Betrayed. The Department. Of. Justice! (Or did she just fail to be a total "Yes-Woman"?) But the "weak on borders and very weak on illegal immigration"? That is not common White House Press Secretary language at all. That is the distilled, heady essence of a ripe Trump Tweet.  Trump got wronged by that female. Etc.

Also, the next person who should have been up for the spot was US Attorney Zachary Fardon, but (and no disrespect to Dana Boente, who I don't even know) I've half an idea that Trumplandia just called up folks alphabetically until someone said "Sure, I'll defend that EO." Made it to the B's. Awesome.

The thing of it is, she would only probably have been holding down her end for a matter of, if that, weeks. She didn't do anything actually wrong, just inconvenient to the Trump agenda, but then again, consensual reality is liable to do a number on the Trump agenda, eventually. But there is a new sheriff, I guess. And he sent a message about what the law is in this town.

Unfortunately, "what he says the law is" isn't how all this is supposed to work. Sad! Also, too, maybe the Administration still hasn't quite figured out how to deal with criticism, yet. Small.
Posted by Vixen Strangely at 12:36 AM