The Role of the Press 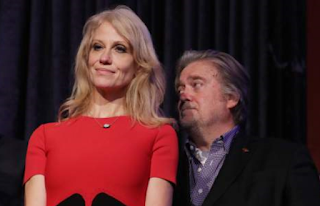 I guess it's been pretty well documented that the package of KellyAnne Conway and Steve Bannon added to the Trump campaign at it's quasi-ebb was probably a gift from the Mercers. This is why it isn't any real surprise to find them on the same page about something like what the media ought to do--like shut their word holes! KellyAnne Conway put this a little bit more diplomatically, by just suggesting that the journos who were "wrong" about Trump (by probably just reporting things that actually happened that were negative, because OMG, yeah) should be fired. As in, said things that were negative but pretty accurate about Trump. Right. Steve Bannon has referenced the media as the "opposition party". So does Trump--it seems a little paranoid, maybe?

This kind of denial that Trump does anything wrong ever and that people can't actually see what he's doing because of the smokescreen is quaint, but I need to direct your attention to this funny bit of WH propo:

“Thank you,” the other senior administration official said before beginning a 45-minute defense.

Their overarching message: Everything is going exactly according to plan, nothing has changed since the order was signed, and the news media need to calm down their “false, misleading, inaccurate, hyperventilating” coverage of the “fractional, marginal, minuscule percentage” of international travelers who have been simply “set aside for further questioning” for a couple hours on their way into the greatest country in the world.

Hi, I'm a grown adult with a history of reading newspapers and voting--are the massive protests and ACLU suits and all that really that dismissible if we were to presuppose a USA that still had Constitutional rights? Because in my world, it looks to me like Donald Trump took an oath of office to the Constitution with no faith in it at all. Are WH staffers really supposed to just take an open crap on the First Amendment like that?

Press Secretary Sean Spicer was heard not that long ago vowing that the press would be "held accountable" for what they do.  It's the other way about--the job of the press is to hold elected officials accountable to the public they supposedly are here to serve. So they can't just pretend all is well. The many protests at airports all over are not normal and are not just some kind of liberal flash mob.  This is about who we are as a nation, and the so-called SJW's, the lawyers and civil liberties types, the bleeding heart pink hats and multiculturalists and immigrant-lovers--

Are America, too. Yeah, this is the crowd that didn't vote for Trump. But hey, he lost the popular vote, didn't he? Maybe listen to the immigrants, and the vets , and the descendants of immigrants, and the people who have done contract or missionary work in those arbitrary seven countries. Try to listen to the narratives that bubble up from the media, who are just trying to tell the story of the day.

Silence is violence, Conway, Spicer, and Bannon. People need to know what is being done in their name. When Iraqi interpreters and their families are detained and submitted to questions they should not be asked about their allegiance, when little kids and disabled elderly Muslims are held for hours at a time, when they could be of no threat to anyone--how is this going well?

This is not well, or normal at all, and if no president ever was faced with so many well-attended protests so early in his term of office, let it be admitted into the record that Trump earned his disapprobation via the hard work of the bigoted villains he let run his shop.
Posted by Vixen Strangely at 1:46 AM