When Americans started to hear about people getting detained at the airport, heard the stories of people who had visas pulled, whose families were being separated, whose lives were being disrupted, whose careers were getting held up, by President's Trump's foolish, arbitrary and cruel Muslim ban, they turned out in force. If Trump was feeling a little something about crowd envy, well, he draws crowds now--to protest his bullshit. Lawyers and protesters came to assist people whose very lives were being played with for no justifiable reason.  And some degree of victory was even obtained on the behalf of people whose future had been disrupted while in transit.

It's a start. But this is the level the US has to stay at, and while it is very good that we saw Rep. John Lewis (who certainly, contrary to what Mr. Trump says, is not "all talk") come where this injustice was happening, and Sen. Elizabeth Warren came to Logan airport, and many other figures came on down, while the support of religious groups is welcome, it's not just about showing up this time--it's about legal challenges, and throwing the Constitution back into the face of this Administration over and over again. It's about sustained outrage that never settles for the short term victory--but keeps protesting until it's Trump and Co. that feel overwhelmed. Calling your representatives to voice concerns or give support to the resistance they give to the White House. The WH is in denial that the slimmest of electoral margins and a serious popular vote deficiency does not give them a mandate for every poorly-thought out promise Trump made in his gonzo campaign bid.

So we'll just have to let them know. 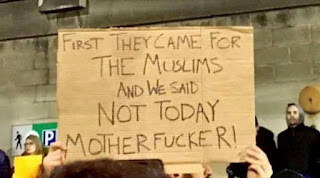 Because this is what it's all about, not the scare-tactics of equating people from other countries and other religions with terror.
Posted by Vixen Strangely at 11:39 PM